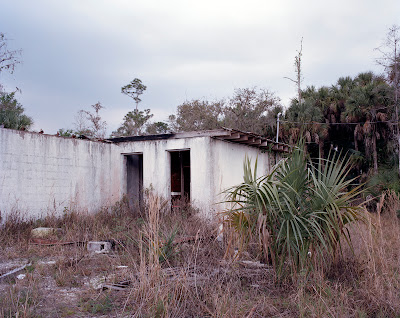 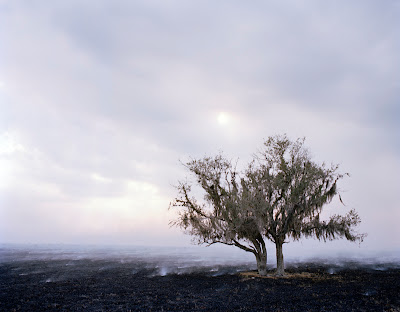 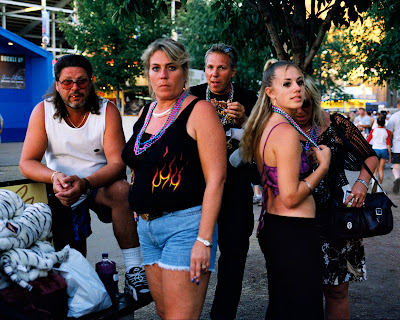 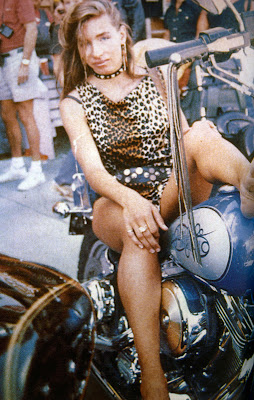 The fact that I couldn't drag myself away from the Guggenheim without guiltily purchasing the catalogue from the Richard Prince retrospective was a testament to the affinity I feel towards Prince's compulsion to collect cool stuff. While my collections are far more humble and fit into one small railroad apartment and a pile of suitcases in the corner of my parents' basement, I certainly relate to the desire to collect America: photos, books, magazines, cars, cowboys, bodies and faces.

The predominant impression that Prince's exhibition left me with was that of his preoccupation with seductiveness. American is cool and beautiful and sexy, in high gloss ads and celebrity photos, but especially at its trashiest and most overlooked. My favorite images in the show were photographs Prince shot himself upstate after leaving New York City - pictures of things he found on back roads, such as an above ground swimming pool, a green muscle car, a forgotten white basketball hoop standing amidst tall golden weeds.

After I made the photograph above at the Minnesota State Fair in 2001, I thought about the series of photos Prince appropriated from the back pages of biker magazines of bikers' girlfriends. I was seduced by the same kind of fierce and explicit rebellion emanating from this cluster of friends at the fair.
Posted by Tema Stauffer at Tuesday, October 23, 2007 No comments:

Beasts of the Field 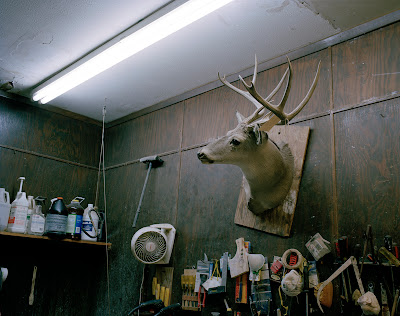 Birds of the Air 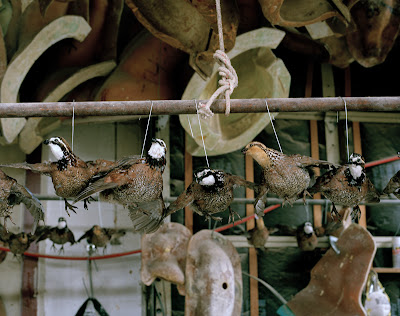 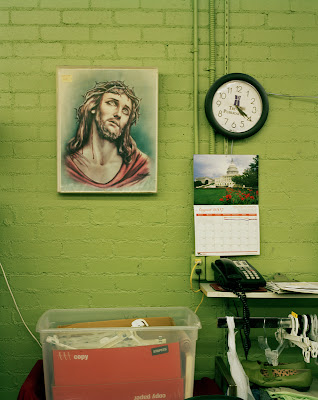 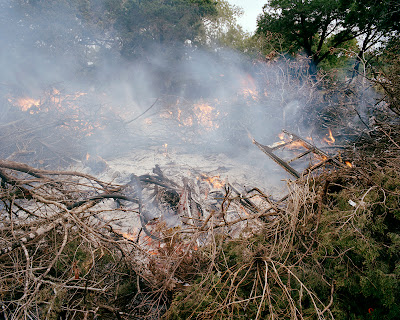 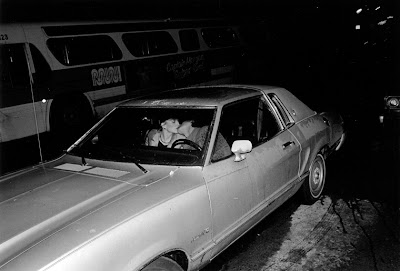 For the past several decades, Minneapolis photographer, Richard Copley, has made trips from his home in Minneapolis to cities like Paris, Chicago, San Francisco and New York to shoot photographs on the streets with his Nikon 35mm camera. When he comes to New York, he stays at a hotel near Times Square, which is one of his favorite haunts for street shots. Now, thankfully, part of his New York ritual includes meeting me for a photo show and dinner at a Chinese restaurant in Chelsea. Richard, or Dick, as he calls himself, orders his food extra spicy and then asks the waitress for more hot sauce.

Dick and I met in the summer of 2004 when we had concurrent exhibitions thru The Minnesota Center of Photography which were re-routed to the Katherine E. Nash Gallery at the University of Minnesota. We took a break from hanging our shows and sat down for lunch at a cafe on the campus in order to get to know one another better. Dick made his living driving concrete and dump trucks for the city and is now happily retired. He is someone who never minces words, and at lunch, he began telling me how much he hates Republicans. Then he stopped himself and asked ... are you a Republican? I said I didn't think that many gay artists were Republicans, especially women.

During our dinner date last night, Dick caught me up on some news about photographers in Minneapolis and told me about his friendship with an early New York street photographer, Ted Croner, whose work I have shown to students in my night photography class at the ICP. We also commiserated over the difficulties of finding love, a favorite topic of mine with anyone who will listen.

Earlier in the evening, we stopped by the 511 Gallery to see the opening of Guise, a group show of new photography by three artists, including Greg Reynolds, whom I met in the color darkroom at the ICP. Greg is showing a series of color photographs he shot in Kentucky, where he was raised and was once a Christian evangelist. Greg combines sensual and romantic images of a dark and handsome young man named Bobby with moody and atmospheric images of the Kentucky landscape. His sense of light is lush and wonderful, and the images brought me back to the Southern writers whose stories I grew up reading, like Truman Capote and Carson McCullers.

I have included above one of Richard Copley's images of a couple making out in a parked car in San Francisco taken in 1983. To see more excellent voyeuristic flash-lit night shots, check out Kohei Yoshiyuki's exhibition, The Park, at Yossi Milo Gallery.
Posted by Tema Stauffer at Friday, October 12, 2007 No comments: 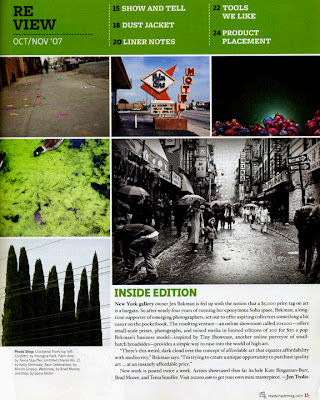 After a string of excellent shows, Jen Bekman continues to rock the photo world with her 20x200 project, an effort to make artwork affordable to potential collectors.

The New York Post ran an article about 20x200, including an interview with Jen Bekman, in their new supplement, Page Six Magazine, this past Sunday Oct.7.

ReadyMade magazine also included a one page feature about this exciting project in their Oct./Nov. issue.

To view work by artists currently featured in 20x200, go to:

The photograph that I contributed to the project, Palm Aire, can still be seen and purchased thru this link: 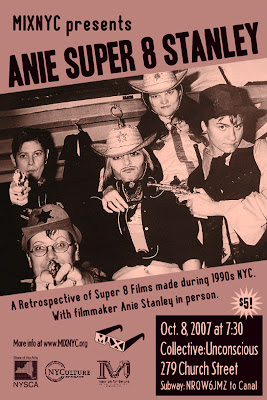 Tonight brings the retrospective screening of Anie Stanley's Super 8mm films, followed by a benefit silent auction to help raise funds for her to save her home in upstate New York, Camp Smokey Belles. Nearly fourty artists have contributed work to the auction, including myself and some of my beloved circus family at Bergdorf Goodman: Shane Ruth, Lynne Chan, Elsie Hill, Danny Bagley, Brett Windham and Abby Walton.
Posted by Tema Stauffer at Monday, October 08, 2007 No comments: 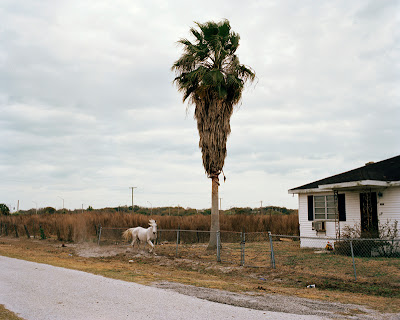 Someday, I want to tell the story of how I arrived at this white horse on a dusty farm in Florida which begins with meeting a midget named Mitch Tucker at a desolate amusement park in Minnesota three years earlier, but it is perhaps too long of a story for a blog, which seems better suited to short attention spans. But this summer, when I re-read Mikal Gilmore's memoir about growing up with his brother, Gary, who was executed in Utah by a firing squad, and about the pain and love and violence that destroyed the Gilmore family, I found this passage about a white horse:

One night, after the days snow had fallen, a white horse wandered into the backyard of the Provo farmhouse. Since Grandview was a small community, everybody knew everybody else's horses as well as they knew each other's children, and the Browns knew nobody who owned such a lovely, ghostly-looking mare. Bessie and her sisters went outside to stare at the animal, and Alta wandered over and petted its mane. When Melissa saw her daughters with the strange horse, she ordered them inside. She tried to shoo the animal away, but it just looked at her.

The horse stood there for hours staring at the house, shimmering in the winter moonlight. When Will Brown arrived home from his job at the school, he chased the horse away. Later that night, my mother heard her parents talking. "You know what in means when a white horse comes to visit," my grandmother said. "It means someone in this house will die."

excerpt from Shot in the Heart
Mikal Gilmore
Posted by Tema Stauffer at Sunday, October 07, 2007 2 comments: 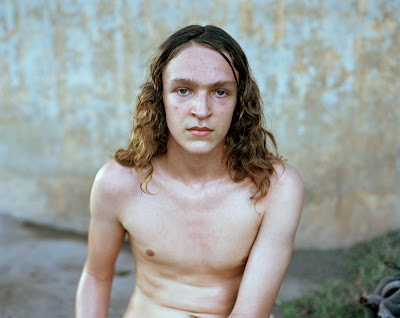 When I am scanning negatives and I arrive at naming a file, I usually just write the first thing that comes to mind about the image. Sometimes these labels are just temporary until I reflect on who or what is in the image, but often these labels stick, and wintergasstation.tiff and frontyard.tiff, for instance, simply became Winter Gas Station and Front Yard. I already maxed out Tree and Trees so I am going to have come up with something a little more descriptive next time I scan some trees.

When I scanned the image above, I labeled it jesusboy.tiff. The hair, of course, but even something iconic and haunted about his face, which was what struck me about him in the first place. It seems to be a familiar experience, spotting a Jesus Boy, at rock concert or sitting alone on a curb in a parking lot. Not so often in New York - I don't know if they live in cities - maybe Portland or Seattle or Hollywood.

My roommate said he looks like an androgynous water nymph. Maybe that's why I liked him as well. I don't know that Water Nymph or Jesus Boy will make it as a title, but I forgot to ask him his name.
Posted by Tema Stauffer at Thursday, October 04, 2007 1 comment: 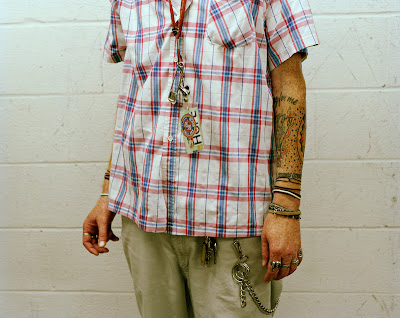 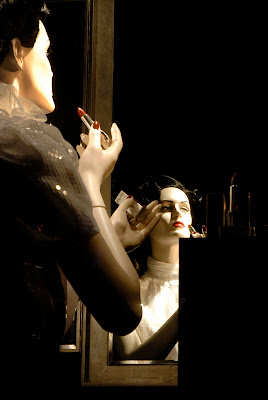