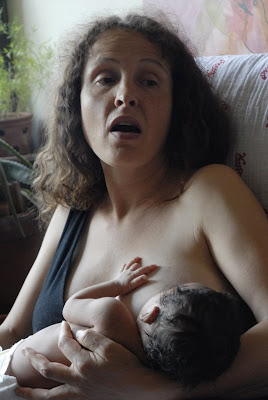 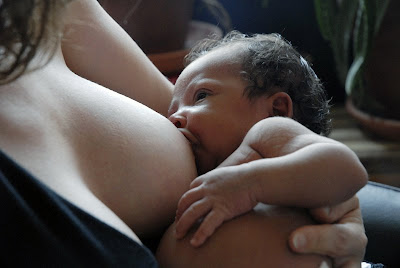 Phoenix was born to my dear friend, Agnes Dahan, at Beth Israel Hospital at 9:38pm on August 8th after twenty two hours of labor. Phoenix was to be Phoenix were she a boy or a girl, and she came into the world with a lovely face and a head of dark, curly hair.

Just a few hours earlier in Michigan, my dog, Paris, passed away in a vet's office. His condition was even more dire than I had comprehended when I brought him home in July. My parents were present, and I talked to them shortly thereafter. I have spent the end of my summer grieving this loss, but I am truly relieved that his suffering has come to an end. And thanks again to everyone who reached out.

A friend asked where I think his spirit is now, and over the past three weeks, I have sought to answer that question for myself. So far, I have come up with five simple answers. His spirit is in dreams and memories. His spirit is in my heart, of course, and the hearts of many who knew him. His spirit is in dogs who I see on the streets of New York and who bring intense pangs of love and affection. And his spirit is in photographs that I cherish now more than ever - his soulful expressions, his seriousness, his silliness.

Sometimes, as a photographer, I almost lose sight of the fact that most people take photographs precisely for this reason - to preserve an impression of someone or something they love. That power and beauty of photography resonated with me in a profound way when I first opened my box of snapshots from our ten and a half years together.

As summer in New York winds down, I spent the afternoon accomplishing the last few essential things on my list of what to do in August. I watched Frozen River at the Angelika Theatre, an astonishing film about a pair of women struggling for survival on the snowy border of upstate New York and Canada. I saw black and white photographs by Scott B. Davis shot at night in the Land of Sunshine at Hous Projects. And I made it to Julie Saul in the knick of time for When color was new (vintage photographs from around the seventies), including work by early color photographers who never fail to remind me why I love this medium, like William Christenberry and William Eggleston.

Tomorrow, I leave on the Greyhound for Binghamton, NY to spend Labor Day weekend with my new girlfriend and her darling mother. I was excited to learn that not only is Binghamton the Carousel Capital of the World, it's also the hometown of Rod Serling ... creator of ... The Twilight Zone. How cool is that?

For now, my full attention goes to the radio, and to Barack Obama, and to one of those most inspiring moments in political history of my lifetime. 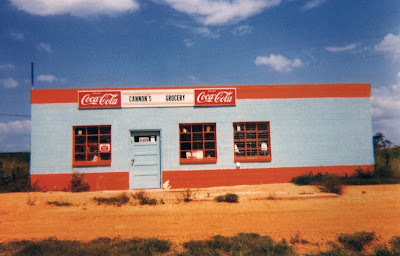 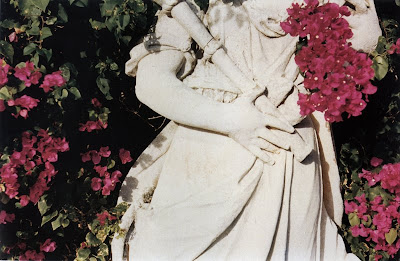 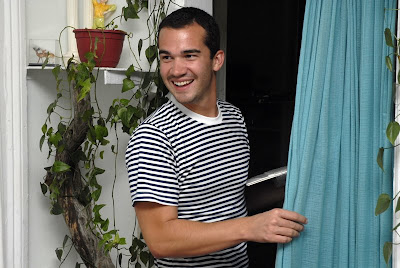 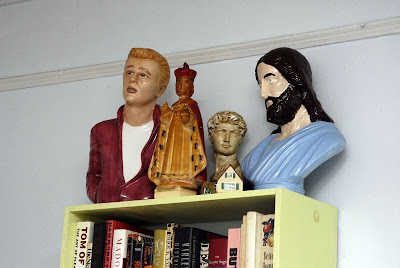 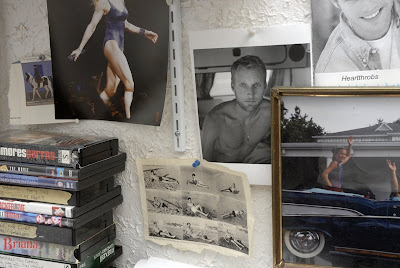 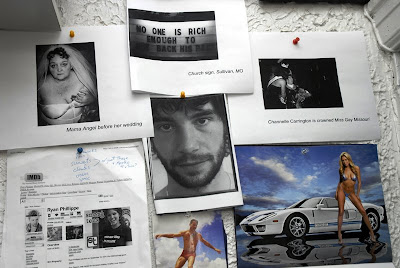 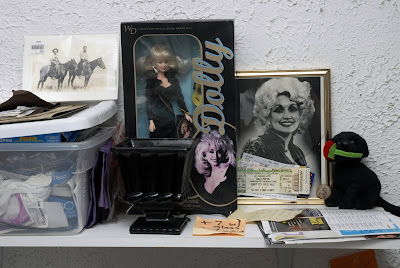 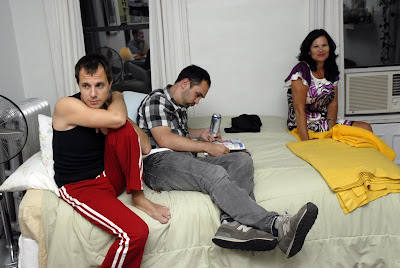 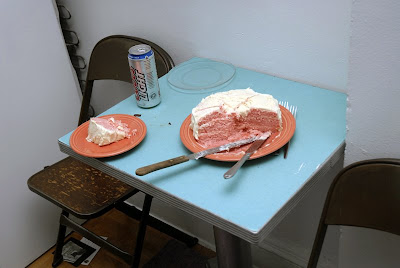 I confess, I have a little crush on Brett Bell. Or maybe he is like the baby brother I always wanted but never had. Brett turned twenty six last night, which means when I was twelve, he was three years old.

Brett's mom, Linda, is in town from Missouri for Brett's birthday and his MFA Thesis Show which opens tonight at Parsons. Linda made the super sweet pink birthday cake pictured above and said that she is responsible for taking Brett to flea-markets where he developed his collections of old photographs, icons and kitschy American stuff. And it's definitely no mystery where Brett's good looks and sweetness come from.

Thank god for moms who love and nurture their gay artist sons.

An interview with me that was conducted this summer by photographer and blogger, Nina Corvallo, was recently posted on the Nymphoto blog and can be found here: Nymphoto Conversation with Tema Stauffer. Nymphoto is a collective of women photographers which functions both as a website to promote the work of women photographers and as a blog to feature news and encourage dialogue about women in the art world.

My relationship with Nymphoto originated nearly six years ago while I was still living in Minnesota. During a trip to New York in the summer of 2002, one of my oldest and closest friends in the arts, Zoe Edmonds, mentioned the newly emerging collective to me and suggested I contact her friend, Nina, to get involved. Some of my work was added to the Nymphoto website in the fall, and I made another trip to New York in December to participate in the Nymphoto's first exhibition, Nymphoto Presents.

This exhibition in a crowded loft on Warren Street stands out as one of the most memorable and significant experiences in my history as an artist. Not only was it a reunion of sorts for me with a lot of old friends from Oberlin College, some of whom I hadn't seen since we graduated, but I also formed new relationships with Nymphoto artists and met a dynamic woman named Jen Bekman standing in front of one of the pieces I was exhibiting (Bird Feeder, 2001).

Shortly thereafter, Jen and I struck up an email correspondence which lead to me return to New York in March 2003 to participate in the inaugural exhibition at her new gallery on Spring Street, which also included work by Mara Bodis-Wollner and Dana Miller. That was the beginning of a relationship with Jen Bekman Gallery which resulted in seven groups shows and a solo show in 2004, as well as my current involvement in her 20x200 project.

Probably everyone at the Nymphoto exhibition on December 5, 2002 has their own version of what that night meant to them and how it effected their individual lives and their relationships with photography, but what is perhaps undeniable is that this event had a profound and lasting impact on the futures of a number of women in the arts. Nymphoto's goal, to provide exposure to work by women photographers and to generate opportunities for their careers, was realized in a myriad of important ways. And nearly six years later, Nymphoto continues to devote itself to discussing work by women artists and addressing the issues and challenges that they face.
Posted by Tema Stauffer at Saturday, August 23, 2008 2 comments: 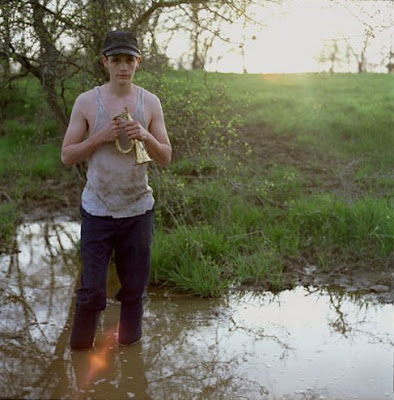 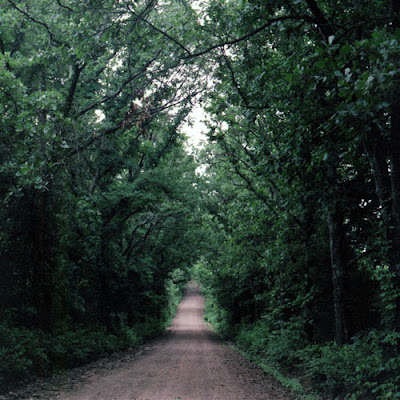 This morning, I had the honor and pleasure of participating in the MFA review committee at Parsons for a graduate student in the photography program, Brett Bell. I met Brett in January 2007 when I gave an artist talk to the photo students in the MFA program at Parsons. I was utterly nervous beforehand and slightly traumatized afterwards, and this sweet boy with a soft southern-sounding voice came up to me later to introduce himself.

Brett and I stayed in touch, and I gradually got to know him better as a person and as an artist. That Brett and I would come to recognize an affinity towards one another's backgrounds and experiences in photography was inevitable.

Brett grew up in Sullivan, Missouri, where he said this morning, there weren't any visible gay people. His early and untitled series of photographs shot in 2005 and 2006 in Missouri consists of portraits Brett constructed using his friends as raw material to create fictitious characters based on his own memories, longings and fantasies. With careful and sometimes campy staging and evocative uses of light and a sense of place, Brett creates a group of adolescent outcasts such a transgender teenager lounging on a bed in a pink room, a lonely overgrown tomboy with a tough and vulnerable scowl, and a number of sultry young men whose appeal is unmistakably homoerotic. Brett's cast of characters is simultaneously autobiographical and iconic of freak kids in small towns everywhere. His images look almost like film stills for a film that doesn't actually exist, but might be something like The Outsiders meets Mysterious Skin meets Hairspray.

Brett turns both towards and away from his appreciation of camp in later work. His campiest work is perhaps his series of images shot from television screens of male figures in soap operas who, when reframed by Brett, become objects of male desire. The title of this series, Sometimes Love is Like a Storm that Blows through and Destroys Everything in its Path, might be one of my all-time favorite titles for a body of work. Why? Because it is true and it is funny, and only a certain romantic type like Brett would come up with something like that, and I love those romantic types.

But perhaps Brett arrived at his strongest series of work, Life is Meant to be Shared, when he set aside his affection for artifice and exaggeration for a more straightforward and lyrical approach to making images. He combines photographs of young men that are more like sophisticated snapshots in contrast to his earlier staged images with beautiful and melancholic photographs of landscapes and interiors in his hometown. The connection to his subjects seems even more intimate, and his nostalgia for Missouri is heartfelt and moving.

Brett will be showing some of this work at two exhibitions later this month. Five of his images will be included in a show which opens at Agora Gallery on August 21rst, and more will be shown in his MFA Thesis Exhibition which opens at Parsons on August 27th.
Posted by Tema Stauffer at Tuesday, August 05, 2008 1 comment: 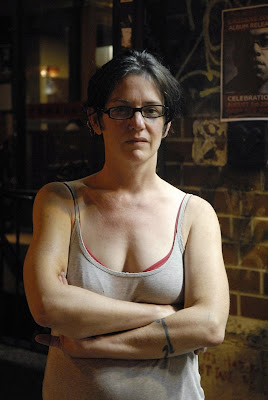 If you are like me (and you are probably just a little like me if you are reading this), than you might have a number of relationships with people which exist as much as or even more than they do on the internet as in "real life," whatever that is. I, for one, have developed what feels like a deep and soulful friendship with a photographer and English teacher who lives in Virginia, Mark Burnette, based on reading one another's blogs and on our email correspondence. I have never actually met Mark and I don't even know what he looks like.

Pictured above is an old friend from Chicago, Melinda Fries, with whom I've had an active internet relationship for several years, though fortunately, we also do get to spend some time together once in a while. Melinda contributed to the cyber art world both as an artist and as the curator of ausgang, a collective website that evolves each season as artists and writers respond to old and new topics. In a class I have taught twice at the ICP called "Photographing the Everyday," I have asked students to consider ausgang topics in order to generate ideas for small projects and to potentially have the opportunity to participate in a creative community on the Web. Some ausgang topics include: Found Photos, Things in the Road, True Crime, Desire, Obsessions and $$$$$.

Last night was one of those times I got to see a flesh and blood Melinda, who is visiting the city with her new husband, Larry. I took the photo of Melinda outside a karaoke bar in the East Village, where we - or I should say, they - sang some tunes, as I am more of a behind the scenes type. As soft-spoken as he is, Larry sings a mean "Desparado," and we were all glad Melinda married someone so sweet.
Posted by Tema Stauffer at Friday, August 01, 2008 No comments: