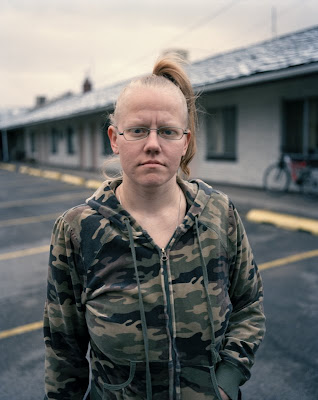 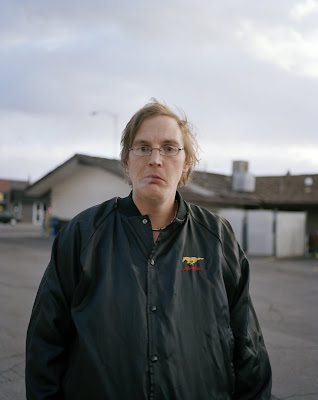 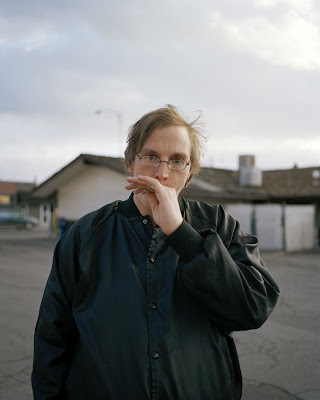 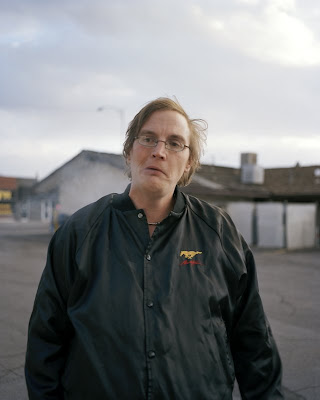 Throughout the night and even the next morning, Wolfman was still pacing and smoking in the parking lot. His girlfriend was arguing with him from her doorway on the balcony of the second floor of the motel, and it was like a play, except it was real. The argument kept Wolfman in orbit around the girlfriend. He couldn't leave the parking lot and yet he couldn't return to their room upstairs. I thought about how often I had been in his shoes, lighting more cigarettes because what else was there to do.

He seemed to welcome the camera as a distraction - a validation of his plight.
Posted by Tema Stauffer at Monday, June 23, 2008 2 comments: 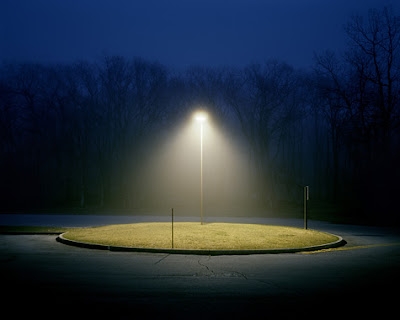 Friday night's opening of Reflect: Full-time Student Exhibition at the ICP was packed with people and energy. I felt just a little like a proud mom to see excellent work by two of my former students, Carl Wooley and Phillip Gutman, both of whom took my Photographing at Night course this past winter.

Carl's piece, Light Pole on Island, belongs to a series of photographs he has been making at night in the city and on the fringes of Long Island. Using a 4x5 camera and long exposures up to thirty minutes, Carl has been producing beautiful and mesmerizing meditations on light and color and empty, anonymous space. His subjects are places like parking lots and woods where leaves and grass are brightly lit by artificial light, giving them an almost alien glow, and other areas of the image fall into a deep darkness. Throughout the course, we picked Carl's brain for his technical expertise and experimentation and were moved by these dream-like and hypnotic images.

Phillip Gutman brought together his interests in classical portraiture, fashion, gender identity and performance in a black & white collage titled Observation, Provocation and Identity. Phillip, whose fierce physical presence calls to mind a Shakespearean actor with a head of thick and curly hair, casts himself as both photographer and subject. His images portray himself photographing his models, who appear to be drag performers of another era, which he combines with images depicting himself engaged in intimate homoerotic scenarios. The narrative he creates leaves us with perhaps some curiosity about a mysterious world he inhabits with lovers and cohorts.
Posted by Tema Stauffer at Sunday, June 22, 2008 No comments: 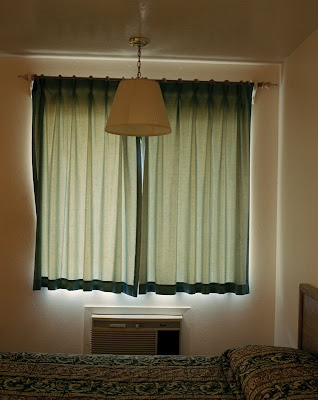 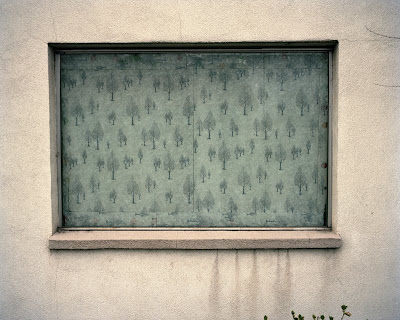 On the flight to Phoenix, I began reading The Executioner's Song for the second time. The first time was in Chicago in the winter of 1997. My girlfriend and I were sleeping on a mattress on the floor of a poorly heated apartment and shared one copy and passed in back and forth and argued over who got to read it on a given night.

This second time around, I got as far Gary getting out of prison in Utah, Gary and Nicole falling in love, Gary getting drunk and high on Fiornal, Gary and Nicole fighting over sex, Nicole breaking it off with Gary, Gary shooting a clerk in a Sinclair Station, Gary trying to have sex with Nicole's stoned sister in a Holiday Inn, Gary shooting a clerk in the lobby of the City Center Motel, Gary getting captured and put in jail, Gary writing love letters - letters full of sexual longing and jealousy and pain - to Nicole, who falls back in love with Gary and tries to take her own life.

Gary's refusal to fight his death sentence, which the book later describes, created a media sensation in 1976 and drew Lawrence Schiller and Norman Mailer and eventually his own brother, Mikail, to tell Gary's story and the story of his family and a story about Utah. A juvenile delinquent with a Mormon mother and a violent father who was perhaps the son of Harry Houdini, Gary spent most of his life behind bars. Handsome in a rough way and intensely masculine with streaks of charisma and creativity, Gary, whose hero was Johnny Cash, had the makings of a dark and tragic American icon. His crimes made history and his character fascinated even Matthew Barney and the art world.

My goal was to find the scenes of his crimes and to discover what exists there now and what psychic energy remains in these places. I had already tracked down the City Center Motel at 150 W. 300 S. in Provo via the internet. I was almost surprised, when I made my first call to the motel, to learn that it still existed, and I asked the clerk on the phone, "Is this where the Gary Gilmore murder took place in 1976?". The clerk sounded uncomfortable and said it was under new management and he didn't know what I was talking about. Later, I made a reservation before I left for my drive to Provo, and it was a good thing I did, since the motel was full when I arrived, and most of its inhabitants seemed to live there for long stretches of time.

I spent the night in a room that smelled like stale cigarettes and felt like any motel room anywhere, really. Dingy, sad, lonely. The most interesting thing to me about the motel was its cast of characters, some of whom I photographed, and whose images will appear soon.

The Sinclair service station in the nearby town of Orem no longer exists as far as I could tell. Norman Mailer describes its location as the intersection of 800 North and 175 East. The closest thing I could find to that address was 800 North and 75 East, where small houses sit at the base of a big sky and snow-capped mountains, and my night pictures of this setting didn't quite make it.
Posted by Tema Stauffer at Wednesday, June 18, 2008 3 comments:

Brian Sherwin, senior blog editor, recently interviewed me for an online publication, myartspace.com. Thank you Brian for the great questions and the opportunity to think back a little.

The interview can be found here: Brian and Tema on MYARTSPACE.
Posted by Tema Stauffer at Saturday, June 14, 2008 No comments: 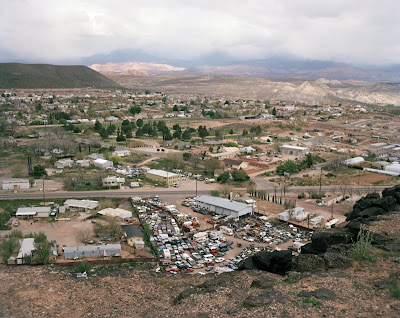 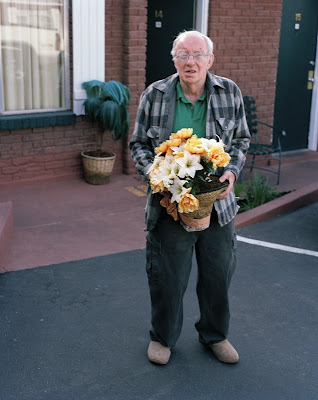 The morning after my trip to Colorado City and Mountain Meadows and my night in the Dixie Palms Motel, I woke up to find Smiley standing in the parking lot outside my room, and I found his innocence as welcome and reassuring as the new morning itself. After I took some pictures of him, he said, "Isn't it great to have a nice neighbor, if only briefly?," and I felt the exact same way.

He invited me into his room for coffee and told me how he took care of the motel grounds and worked with kids on the weekends. The room was his home, and he showed my some of his belongings and the contents of his icebox. He said that he stocked up on a week's supply of cheeseburgers from McDonald's to save money, and reheated the burgers in his microwave, which I thought was pretty gross, but I kept that to myself.

Everything about Smiley spoke of kindness and gentleness, and I felt lucky to start a new day on this note.
Posted by Tema Stauffer at Sunday, June 08, 2008 2 comments: 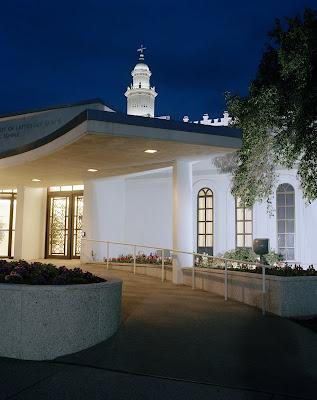