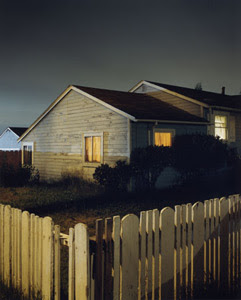 I was excited to learn that Todd Hido will be talking about his new monograph, Between the Two, at Aperture Gallery on Tuesday. I have long been a fan of his gorgeous photographs, and his work has been included in two group shows at Jen Bekman Gallery. His earlier books - House Hunting, Outskirts and Roaming - are staples in the night photography class I teach at the ICP. In fact, one of the assignments I give students is to research a photographer and shoot a series of photographs that reflect, exaggerate or even parody his or her style, subject matter and use of lighting. Every session, at least one student chooses Todd Hido's work, and in my current class, almost a third of the students referred to Todd Hido as their source of inspiration. His mastery of light and his ability to create a sense of mystery and mood is undeniable and almost baffling.

What is sexy about most of his work is what is left to the imagination. The model shots seem too explicit, obvious and cliched. It is disappointing, really.

But nevertheless, I look forward to hearing what Todd has to share about his motivations and processes ... 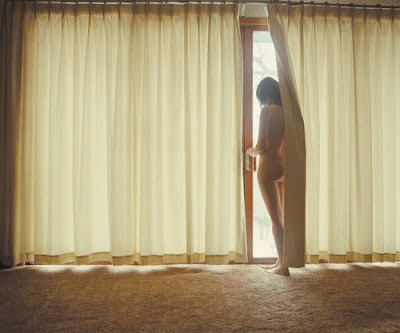 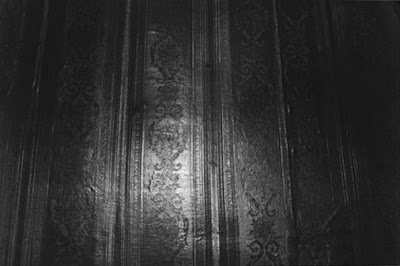 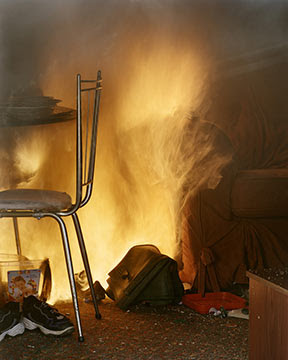 Sometimes on my days off from working to pay NYC rent, I remind myself of the most obvious fact that the greatest luxury of living in this city is the ability to see extremely cool art beyond the internet on any given day. Recent trips away from my suburban haven in Brooklyn and into the big city led me to some beautiful and haunting rooms.

One of these rooms is currently on the wall of the Whitney Museum and was brought to us from Minnesota by a photographer based in Chicago, Melanie Schiff. Melanie has photographed a young woman standing with her back to us between parted curtains in a hotel room in Canon Falls, where Kurt Cobain recorded an album with Nirvana. The quality of light and the eerie lore surrounding the image left me standing in front of the it for a long time, mesmerized and quietly unnerved, and returning to it the following day. Her other images in the Biennial include similarly seductive and beautiful and pensive explorations of physical and psychological spaces such as a bathtub harboring an oversized house plant and a dark blue album decaying in a reflecting pool. Both resemble still life paintings and possess a simplicity and depth that rarely seems to be achieved so well in photographs.

I also liked what Melanie wrote about what motivates her work. She said "she wants to make photographs that are like a sad song that - even though created by someone else - somehow resonates with our own experience." She couldn't have accomplished that goal more poignantly, as far as I was concerned. It didn't seem accidental that her photographs were positioned in proximity to Robert Bechtle's photorealist paintings of empty, quiet, tranquil streets. The combination of these two bodies of work was the highlight of the Biennial for me, though I am admittedly biased and have a short attention span for the abundance of video and installation pieces.

I later discovered a vast series of rooms photographed by a Belgian photographer, Dirk Braeckman, at Robert Miller Gallery in Chelsea. When I moved to Minnesota in the winter of 2001, the first thing I bought was a small green book containing grainy black & white images of feebly flash-lit interiors with absolutely no trace of text. I fell in love with it in the bookstore at the Walker Art Center and brought it back to my suburban ranch house in St. Louis Park. I had never heard of Dirk Braeckman before and haven't heard of him since. According to The New Yorker, this is his first solo show in New York. The New Yorker described his noirish images of beds and couches and curtains and wallpaper as "deeply depressing" but I found them to be something more along the lines of profoundly mysterious.

Just one block below at Daniel Cooney Fine Art, I even got to see some rooms on fire. Wow. Sarah Pickering's new images were made in "burn units" - which, I learned, are fully furnished rooms rigged to teach forensic teams how to determine the origins of household fire and arsons. Well, the effect is astonishing. I couldn't stop wondering enviously how it is that some artists arrive at such crazy and amazing ideas. Why didn't I think of that? How fun would that have been to photograph? It appears from her website that Sarah is a big fan of explosions. Check it out.
Posted by Tema Stauffer at Tuesday, March 25, 2008 No comments:

Well, I made it out of the panel discussion alive and in fact, truly enjoyed the dialogue with Amy and the other panelists. Thank you to Amy Stein for leading our discussion and thanks to Cara Phillips, Mary Mattingly, Sarah Small and Dina Kantor who filled in for Rachel Dunville.

Thanks also to the 3rd Ward and Ladies Lotto as well as Jon and Amani and the rest of Humble Art Foundation for facilitating the exhibition and event.

Also, thanks to my friends who shared their experiences and insights as women in the art world and beyond when I contacted on them on Saturday afternoon to help me prepare for the discussion: Alex Loria, Suzy Poling, Heather Willems, Agnes Dahan, Athena Waligore, Debbie Grossman, and Corinne Dolle.

And thanks to those friends who showed up, despite my neurosis.
Posted by Tema Stauffer at Sunday, March 23, 2008 No comments: 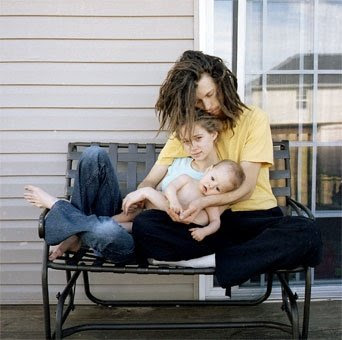 I will be joining a panel of emerging female photographers based in New York at the 3rd Ward on Saturday to discuss what it means to be a woman making art photography. This discussion is in conjunction with the current exhibition in The Gallery at the 3rd Ward called 31 Under 31: Young Women in Art Photography organized by Humble Art Foundation and Ladies Lotto.

The panel will be moderated by photographer Amy Stein, whose work and blog and active presence in the photo world have been a great source of inspiration to me and to countless other photographers - men and women alike.

Pictured above is my favorite image in the exhibition by photographer and panelist, Rachael Dunville. Other panelists include Cara Phillips, Mary Mattingly and Sarah Small.

As I am intensely shy and nervous about speaking in front of groups of people, I am sorry to say that I am not actually planning to invite anyone I know in real life as I might have to see them again. It is only Tuesday and already, I am a bit queasy thinking about it. But I'd have felt worse if I ran away from this, as it is such a worthwhile topic and group of women, and in theory, I suppose one should do their best to overcome these fears.

Yesterday, the rain and howling winds left me hunched over my computer for ten hours straight spotting dust off of dusty scans of negatives from a trip I made to Taiwan in the summer of 2003.

One of the prints from a series I shot from the window of a bus en route to Taipei was recently donated by George Slade, Director of the Minnesota Center for Photography, to the Minnesota Museum of American Art in memory of their former director, Jim Czarniecki. I thought it would be a good opportunity for me to revisit these images and to create digital files for the first time.

Anyone who knows me knows that I spend most of my life in a state of unfulfilled romantic longing for one thing or another, and when I returned to Minneapolis in July after three weeks in Taiwan, I was heartbroken. I had culture shock coming home, as the abrupt shift in color palettes and cultural stimuli left a gaping hole in my soul.

I got a job waiting tables in a Thai restaurant. I bought a rice cooker and a dragon blanket. I watched all of Tsai Ming-Liang's films and all of Wong Kar Wai's films. I watched Japanese horror films. I wrote grant proposals to return to Asia to shoot photos, none of which manifested into another trip.

Eventually, I moved to New York City, and the pain has reconfigured into something else. When I take students in my night photography class at the ICP on field trips in Chinatown, I am reminded of these old feelings. I love their photos of chickens in foggy windows and of glittering things for sale. I love those splashes of pink and red and the blur of haunting faces on the street. 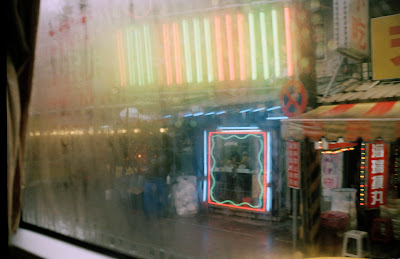 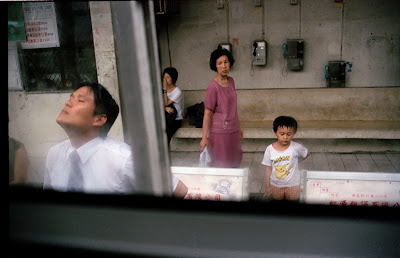 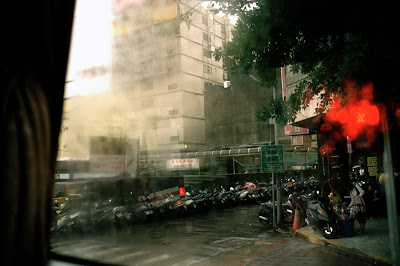 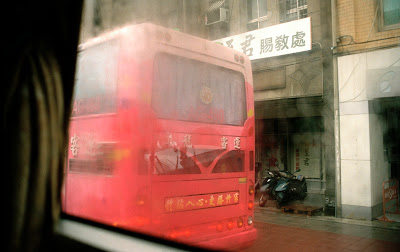 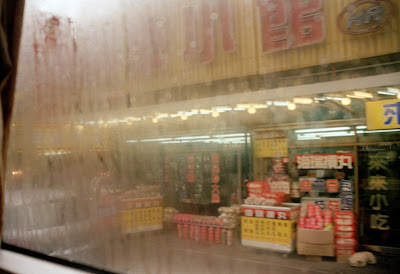 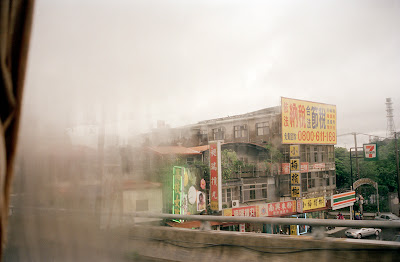 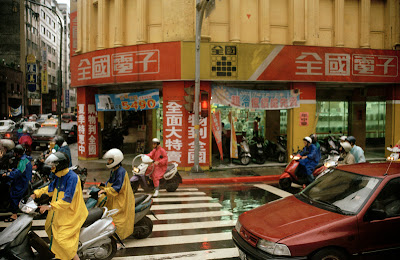 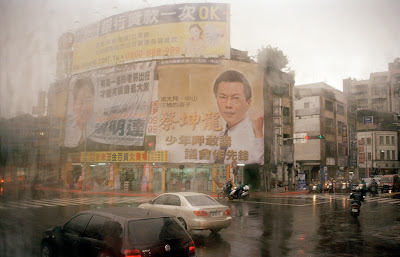 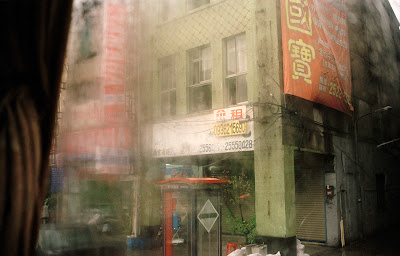 I have a small show consisting of older and more recent images currently on view at Tyler School of Art in Philadelphia. I'm hoping I can jump on the Chinatown bus sometime this month to visit the school and to eat some awesome Vietnemese food. Philly cheese steaks are way more than I can handle - yuck.

Thank you to Karen Kirchhoff and Michele Tecco for organizing the show, and to Dave Kube and Tamsen Wojtanowski for driving up to Brooklyn to pick up the work.

I am looking forward to the opening tonight of 31 Under 31: Young Women in Art Photography at The Gallery at the 3rd Ward. This exhibition was organized by the Humble Arts Foundation in collaboration with Ladies Lotto and curated by Jon Feinstein and Lumi Tan.