I first learned of Marfa, Texas from conversations with my friend, Matt Olson, a musician and dreamer who in recent years has developed a company in Minneapolis for landscape design called rosenlof/lucas. He described this amazing little town in West Texas where Donald Judd lived and worked since the 1970's and ultimately founded the Chinati Foundation.

The Chinati Foundation is located on the site of a former military headquarters known as Fort D.A. Russell or Camp Marfa. In 1979, with initial support from the Dia Art Foundation, Judd converted these artillery sheds and army barracks into a contemporary art museum to preserve large-scale sculptural installations by minimalist artists including Dan Flavin, John Chamberlain, Roni Horn and Claes Oldenburg.

The Chinati Foundation now attracts thousands of visitors to Marfa each year and draws international artists to its Artist-in-Residence program. Scenes from a number of films have also been shot in and near Marfa, such as Giant starring James Dean, and more recently, both No Country for Old Men and There Will Be Blood.

A few days before Christmas, I drove across the desert from Austin to Marfa and spent a night in a room at the Thunderbird, an astonishingly sexy hotel influenced by Donald Judd's minimalist vision. I shot photographs in the area on film which I hope to look at later this month, but also took some digital snapshots at the Chinati Foundation for instant gratification and to share with Matt and anyone who might check into this blog ... thank you for looking and happy new year. 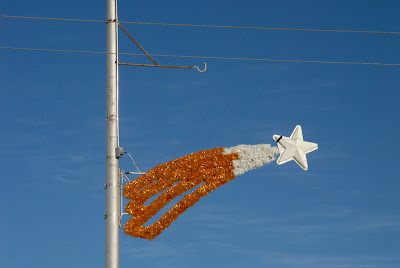 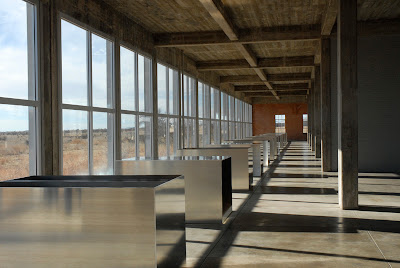 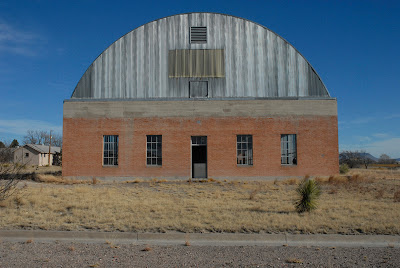 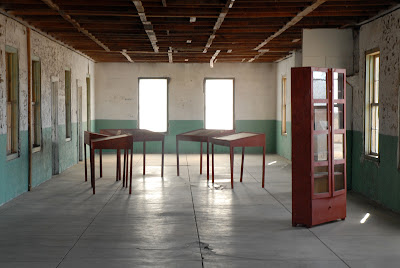 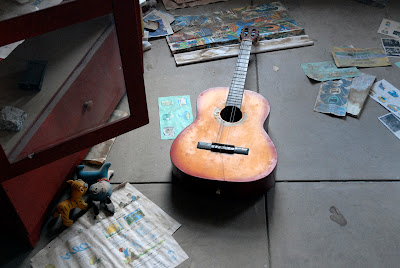 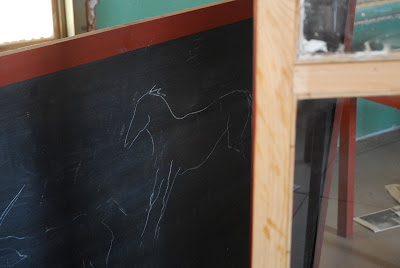 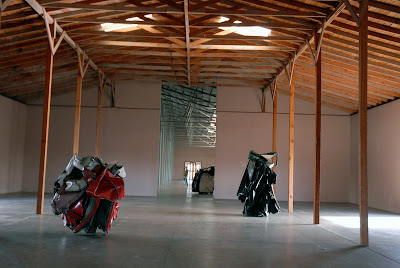 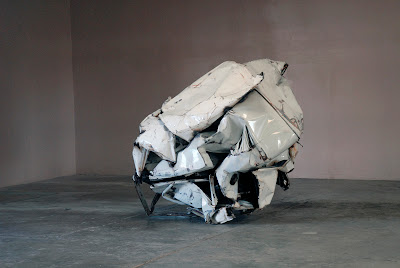 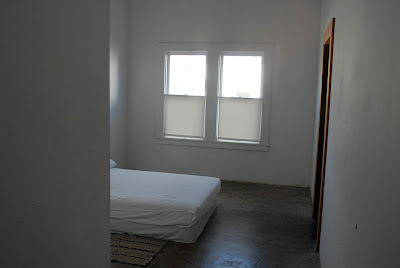 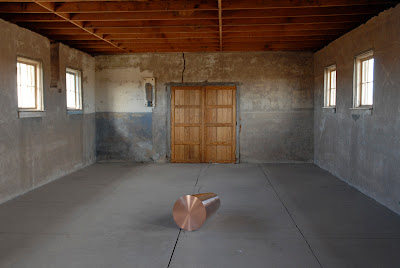 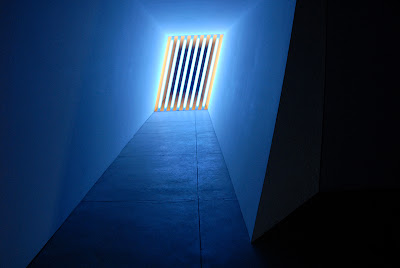 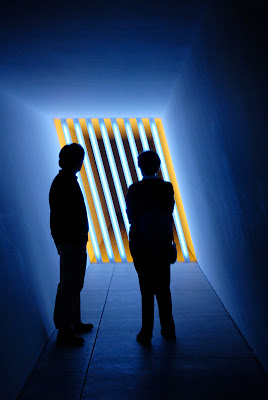 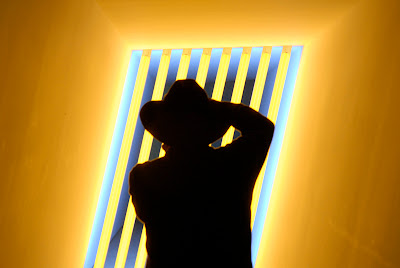 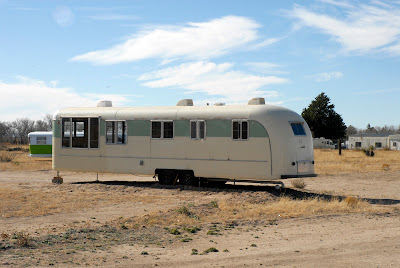 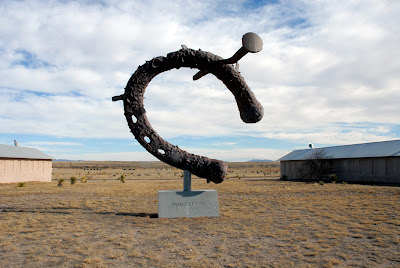 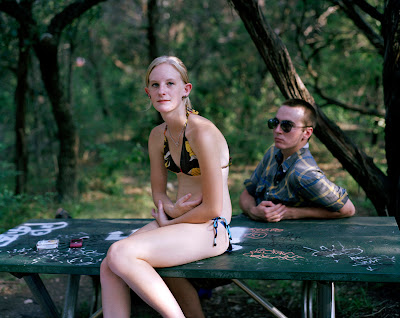 Spotting this young woman on the picnic table in the woods at Twin Falls was almost startling - like love at first sight - I got instantly nervous and sweaty - but it was the same kind of attraction I felt towards the teenage boy at Barton Springs. It seemed like forever since I thought to take pictures of people, and suddenly, these teenagers at the river's edge revealed a beauty and awkwardness and sexuality that awakened a long buried desire.

Unfortunately, I didn't manage to get her face into sharp focus, which has brought me some real disappointment and frustration, wishing I could step back in time and change that moment ever so slightly.

But at least looking at this image reminds me that I discovered someone and somewhere that I cared about, and while I'll probably never find her again, at least I can finally go back to the woods to look. For four months, I've wondered who will be sitting at that picnic table when I walk into the woods, if anyone. What will the light look like on his or her face and body? Will anyone be swimming in the river nearby? Will the woods be deserted, or do some of them come around all year long?

Where I grew up, it was the cemetery, the lakes, the woods - these places of solitude and intimacy and rebellion - the first places I ever took pictures.
Posted by Tema Stauffer at Sunday, December 16, 2007 2 comments: 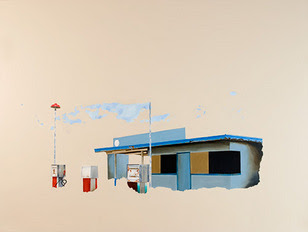 I recently received my purchase from Jen Bekman's 20x200 project, an 8x10 print of Eric Graham's West Texas gas station, which is now hanging on the wall in the bedroom of my recently re-shuffled Brooklyn railroad apartment. I first learned about Eric's work on Jen's 20x200 blog, which describes her relationships to the artists in the this project as well as her insights into their work. Jen drew a parallel between photography of the American vernacular - things like parking lots, dusty small towns, billboards and gas stations - and Eric's paintings of the same subject matter. She mentioned her love/hate relationship to this type of work, and god knows I am a sucker for this stuff, but also recognize and struggle with the dilemma these subjects present.

Nevertheless, I simply couldn't resist Eric's cool and minimal painting. And as I am headed back to Texas in two days, his vision of romantic empty spaces and fragments of roadside architecture brings some inspiration and longing.
Posted by Tema Stauffer at Saturday, December 15, 2007 No comments: 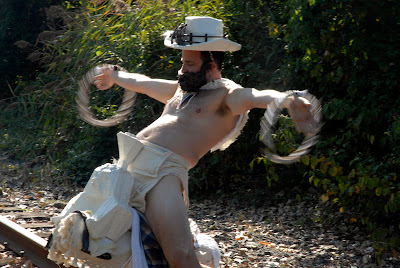 Regretfully, I will miss the opening tonight of Saddle Muscle at Sunday, a new gallery in the East Village. A very special friend, Shane Ruth, will be showing recent work in sculpture and video, and on a balmy afternoon earlier this fall, I had the privilege of accompanying him on a shoot for this exhibition.

Partly, Shane brought me along on this adventure to an equestrian park in suburban New Jersey to take pictures and turn a video camera on and off, but my real job was to play "girlfriend" in the event we ran into any trouble. As hard as I try, it's not often that I get to be someone's girlfriend, so I jumped at the opportunity. I wore cut-off denim shorts and a soft peach t-shirt, and he even drove me around in his car and bought me cheeseburgers and onion rings and took me to a Vietnamese spa afterwards. Wow. Why can't I find a girlfriend just like that?

Shane has charisma that makes almost everyone swoon, and watching him rock his home-made saddle half-naked out in the woods was a little moment of heaven. And when we were inevitably accosted by a concerned father whose house bordered the train tracks, I was prepared with my best midwestern smile and naivete.

To see more of Shane's cloth cowboy accoutrements, and the final performance on the equestrian field, stop by:

You're in My Space 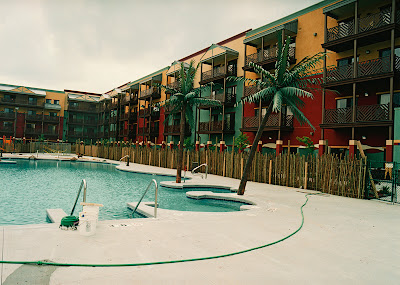 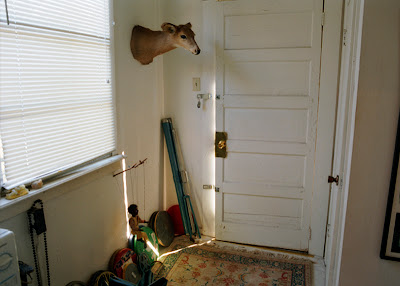 Two of my photographs, Water Park #1 and Back Door, are showing in an exhibition called "You're in My Space" which opened last night at Gallery 2 and Project Space at the School of The Art Institute of Chicago.

"You're in my space" explores and reinterprets our physical surroundings, drawing on personal, psychological and cultural relationships. The artists included in this exhibition investigate different notions of space: abstracted locations, remembered sites, and re-contextualized environments. Recognizable spaces are transformed, creating the possibility for an unexpected discovery.

I made a series of three images of the Kalahari Water Park Resort in the Wisconsin Dells in the late winter of 2004. I frequently drove by this water park en route to Chicago from Minneapolis on I-94 and was intrigued by this colorful play-land for Midwestern families. Often, I pass places at the side of the road with a sense of regret that these sites are so close and yet inaccessible, but on this particular drive on an overcast afternoon, I pulled off of the interstate and navigated my way through the resort's immense parking lot. It was off-season and the park was mostly deserted. Some of the pools where before I had seen bodies splashing in the sun-light were drained, leaving large and empty and modernist shapes, or where water remained, it was uncannily quiet and still. The absurdity of these giant plastic animals that embody Kalahari's allure seemed heightened by their aloneness in this dreary and desolate manufactured landscape.

Despite my wariness of a preoccupation with this subject matter, animal figures seem to inevitably creep into my pictures. In October of 2005, I made a short trip to Louisiana that was originally motivated by a desire to shoot video footage of the legendary Angola Prison Rodeo for a project that sadly never amounted to much more than a cool experience. Before the rodeo, I spent two days in New Orleans driving through the city with friends, absorbing and photographing some of the damage that Hurricane Katrina had left two months earlier.

D. and I spent the night with one of her artist friends from graduate school, and in the morning, I was struck by what I discovered at his back door. A taxidermy deer head hung above a dark puppet whose arms dangled from strings and which was illuminated by a slant of morning sun-light passing through the slightly cracked door. It was in this juxtaposition of these charged symbolic elements that I felt acutely attune to the mysterious and complex history of the region. It felt as though New Orleans revealed a sliver of itself to me in a quiet moment that might have been so much easier to overlook than the collapsed houses and stark contrasts of the surrounding neighborhoods.
Posted by Tema Stauffer at Saturday, December 08, 2007 No comments:

A Field Guide to the North American Family: The Exhibition

In sixty-three entries and an accompanying website (afieldguide.com) Hallberg's novella offers a collaborative portrait of two fictional specimens and the environments they inhabit. Both established and up-and-coming photographers contributed to this edition's lavish illustrations via the website, an ongoing, networked internet community. Part fiction, part reference work, part photo-essay, the book and the exhibition invite viewers to consider the contemporary state of the American Family.