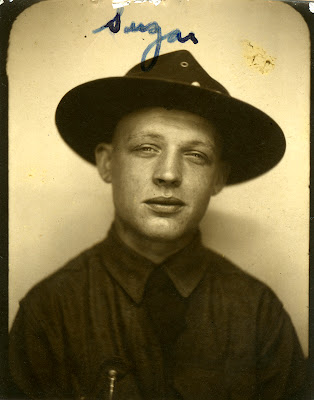 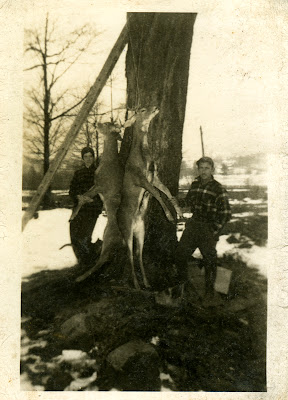 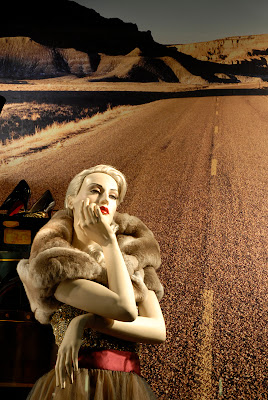 I am back in New York with a bag of film from my trip to Texas keeping cool in my refrigerator until I can begin the process of developing and scanning. In the meantime, here are some digital shots of details of paintings of the American frontier on display at The Blanton Museum of Art in Austin. 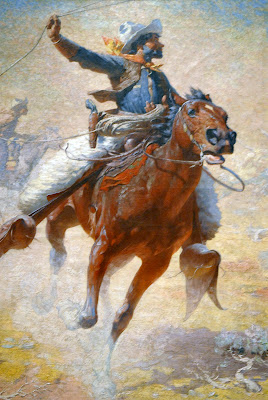 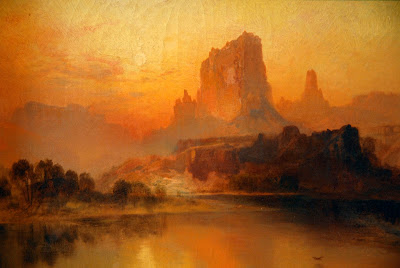 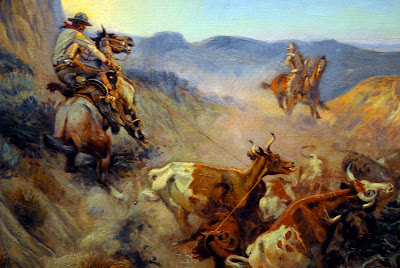 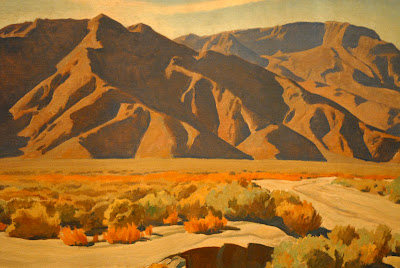 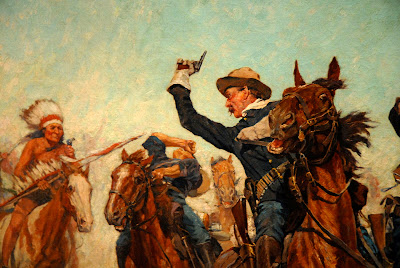 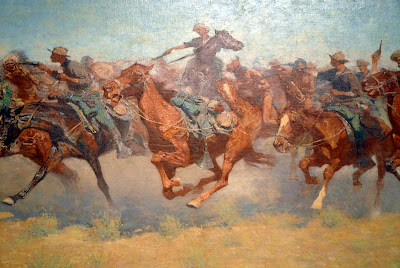 Frederic Remington
The Charge [A Calvary Scrap], 1906
Posted by Tema Stauffer at Sunday, August 19, 2007 No comments:

I spent the morning making a brief tour of art spaces in downtown Austin. While taking pictures at Barton Springs earlier in the week, someone told me about Will Van Overbeek's exhibit of photographs of Barton Springs at The Austin Museum of Art. Unfortunately, the show had ended and the museum was closed for installation, but I have since looked at Overbeek's highly saturated and frenetic images of the pool atmosphere on his website.

I made my way to the new Blanton Museum of Art and raced thru the first few galleries of dark, old European oil paintings and reproductions of Roman busts. I was more intrigued by a collection of early twentieth century paintings of the American West.

In an eclectic exhibit of modern and contemporary American and Latin American art, I was struck by a large and thickly textured oil painting, Dallas Chaos II, by Peter Dean depicting the Jack Ruby's shooting of Lee Harvey Oswald, including glitter and a photographer figure looming hungrily with his 35mm camera.

There was little photography to be found except for a series of small color photos by Sigmar Polke showing a ruler bent into the shape of a star and a print by Gerhard Richter of his studio.

My favorite two pieces in the exhibition fall into the category of new media. I loved a piece by Emily Jacir titled from Texas with Love which consisted of video footage on a monitor driving on a highway thru the desert of west Texas. The artist had asked a group of Palestians, if they were given the opportunity to drive freely in car with interference for the Israelis, what song would they listen to? 51 songs which one could listen to on a set of headphones accompanied the visual imagery, including Material Girl by Madonna.

I was also mesmerized by a dvd projection by Anton Vidolke which documented in fragments of real time his process of painting the exterior of an old metro station in Mexico City with red paint.

My art tour ended at the Arthouse of The Jones Center where I saw a show called New American Talent The Twenty-Second Exhibition. I was excited to find two photographs by Sam Gerazi whose work I first fell in love with at a Hey, Hot Shot exhibition at Jen Bekman in 2006. The two untitled pieces he is currently exhibiting are shot in an unusual 4x10 format creating almost panoramic views of concrete parking spaces within and outside of a Walgreens at night. The images are cool, painterly, minimal, elegant, eerie.

I also enjoyed a series of odd and whimsical images by a photographer originally from Minnesota, William Hudley, capturing blobs of fabric floating in front of everyday urban landscapes. The fabrics suspended over these backgrounds create interesting color fields and a sense of playful otherwordliness.

And a remarkable oil painting by Kim Owens of telephone poles on a street mixing bold, graphic lines with softer,impressionistic areas of color.

All of this art consumption was a welcome break from Texas heat and meat.
Posted by Tema Stauffer at Wednesday, August 15, 2007 2 comments:

So far in Texas, along with taking pictures and swimming and alternating from amazingly hot temperatures to amazingly cold temperatures, I have been eating a lot of meat. In just a few days, I have consummed ribs, brisket, sausage, chorizo, pork, steak, chicken, fish, shrimp, octopus, a hot dog - not to mention gallons of lemonade and Coke. I am starting to feel like a snake who just swallowed a mouse.
Posted by Tema Stauffer at Wednesday, August 15, 2007 No comments: 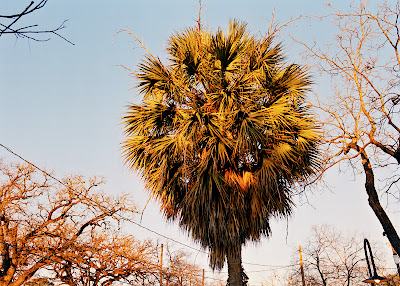 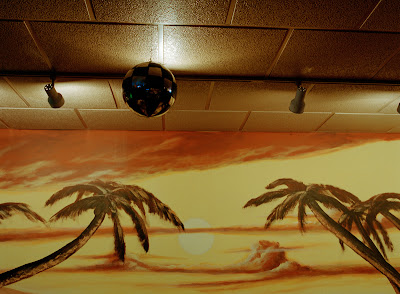 I fly to Texas tomorrow for a week in the August heat and air conditioning. The last time I was in Texas was in December 2004 to celebrate Christmas at my brother's house. I left some of the coldest temperatures of my four Minnesota winters and found myself putting on a t-shirt and walking around my brother's neighborhood in the sun.

I had spent a week in New York earlier in October for the opening of my show, American Stills, at Jen Bekman and had met somebody the following night. My head was spinning with this new long distance predicament when I arrived in Texas. I told my parents I had fallen in love with a glass artist and I was giving serious consideration to finally making this move to New York which had been looming in my thoughts for some time.

I laid sleepless on the couch in the living room trying to imagine how I would survive and make a living and take pictures in this big crazy city. I got so worked up with excitement and anxiety, my mom sat in the room and talked to me in her calm, soothing voice - having so many years of experience and patience with my ups and downs and convictions and uncertainties.

In the morning, I got up early while my family was sleeping so I'd have some time alone to roam with my camera. I found a palm tree near my brother's house dazzling in the morning sunlight like a beacon of some hope and optimism.

By July, I had packed up my things in Minneapolis and had begun the journey to New York City, finally arriving at an apartment on Clinton Street that was home for five months until D. and Paris and I found a place in Brooklyn where an eccentric older man had passed away in his sleep and left his brother alone and bereft next door.
Posted by Tema Stauffer at Thursday, August 09, 2007 No comments:

WANNA GO HOME WITH ME TONIGHT 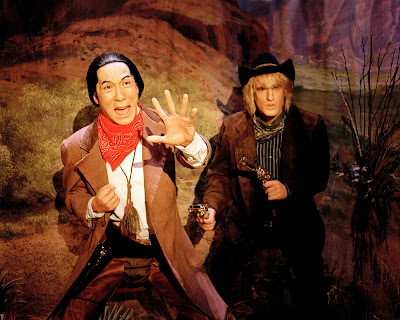 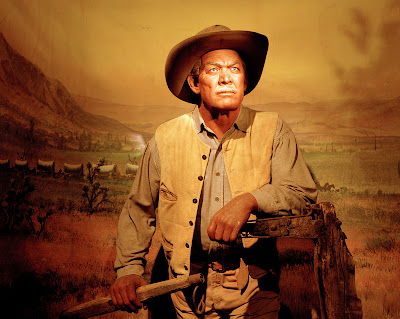 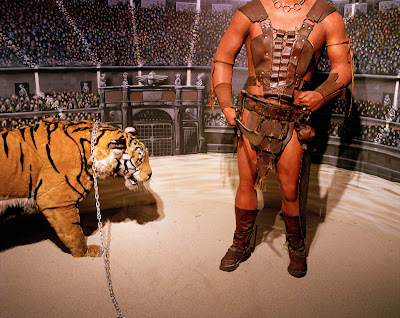 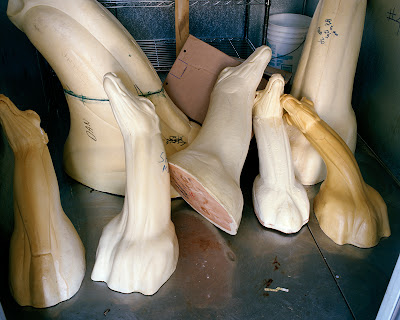 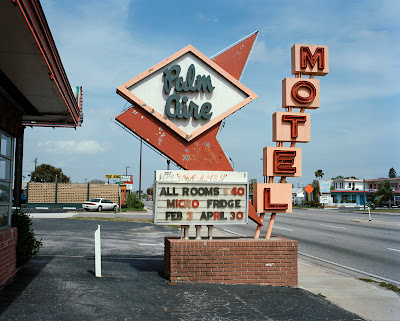 There is nothing I would love more than an opportunity to make a cross-country road trip. But for now, I had to settle for a cross-town bike trip to Yancey Richardson Gallery in Chelsea to see the current exhibition "Easy Rider: Road Trips Through America". If I were to make a list of my all-time favorite photographers, it would look much like the list of photographers in this exhibition, including William Eggleston, Robert Frank, Ed Ruscha, Stephen Shore, Joel Sternfeld, Tim Davis, and many more. Though my list would include some less recognized, more emerging types as well. One of the images that stood out to me was a collage of snapshots of women shot in a biker bar by Lisa Kereszi. I was a little startled that one of Eggleston's famous dye transfer prints priced at $35,000 looked a bit like a digital file gone awry. Nevertheless, an incredibly inspiring show. I also enjoyed seeing some prints from Amy Stein's Stranded series in another road trip show at Mixed Greens Gallery.
Posted by Tema Stauffer at Wednesday, August 01, 2007 No comments: