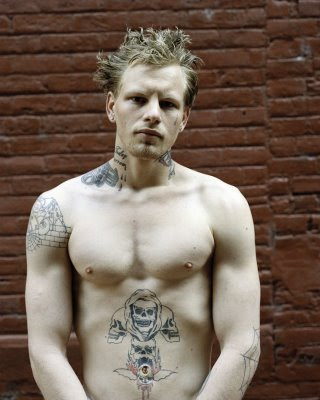 I found Jacob standing on the same block of Main Street where I met him in October. I yelled "Jake" out of the car window, and he smiled and waited for me to park the car.

We walked towards the Chenango River, and he told me that he might have found some construction work in Syracuse. He was trying to figure out the best way to get up there, and we talked about the Greyhound bus.

He said he liked the picture of him that I had sent to his email address and he put it up on his MySpace page. I told him some of my friends had seen his photo and said he was gorgeous, and one of them said he could be a Calvin Klein model. He laughed and mentioned an experience with the Chippendales.

I asked him about girlfriends, and he said there was someone he liked. He was planning to help her move out of her apartment later that morning and was waiting for her phone call.

He said there was someone else who liked him, and she had a lot of money, more than $300,000. He seemed to be mulling it over, but said he had been in these kinds of relationships before, and they never last. I said I thought it was probably best to follow his heart.

We talked about New York again, and I told him how much the city made me miss things like trees and clean air, and he said he would miss that too. He told me he loved to walk, and every day, he walked miles up and down Main Street.

I asked Jacob where he got his tattoos, and he said he got some of them done in a shop, and the ones on his chest were done in jail. He lifted his shirt to show me the tattoos on his chest, and I asked if I could take pictures of them. I asked why he had spent time in jail, and he said he had been in and out of jail since he was fifteen for small things like driving without a license, and I didn't press him for more information.

We walked into a red brick alley near Main Street, and he took off his shirt. We barely spoke while I took pictures of him. At one point, I said, "You remind me of a famous German painter, Egon Schiele, with your hair sticking up like that," and I don't think he knew who I was talking about, but it felt like a compliment, and he smiled.

When we left the alley, I said I'd give him a ride to the library where he was planning to meet up with his girlfriend. I felt just slightly awkward in the car, and asked him questions to fill the silence.

I fumbled with the radio.

"What kind of music do you like?" (I hate that question).

"I like everything. Rock, country, whatever." (I probably would have said the same thing).

"Do you play any instruments?"

"No, some of my friends are in bands."

We got to the library, and he opened the door of the car. He said, "Stay in touch," and I said I would.

During the next two days, I saw Jacob on Main Street several times standing with groups of guys. He acknowledged me, but I felt like we were keeping something between us.

Tomorrow morning, I am leaving to spend Thanksgiving with my girlfriend and her relatives and to drive the wintery streets of Binghamton again.
Posted by Tema Stauffer at Monday, November 24, 2008 4 comments: 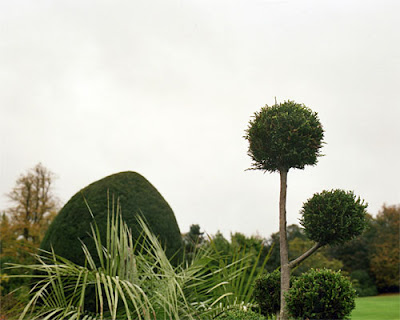 Daniel Cooney has curated work by 25 photographers for an Emerging Artists Auction which is available online through December 10th. Among the participating photographers are Brett Bell, Dana Miller, Cara Phillips, Asha Schechter and Will Steacy.

All of the work can been seen and bid on here: Emerging Artists Auction
Posted by Tema Stauffer at Sunday, November 23, 2008 No comments:

Randall Scott Gallery will be exhibiting at the Art Miami fair during the Art Fair Miami Beach Week December 2nd - December 7th. Randall can be found in Booth B-17.

He will be showcasing new work from Julia Fullerton-Batten, Chris Anthony, Lori Nix and Ryoko Suzuki.

He will also have some of my work, along with work by Cara Ober, Etsuko Ichikawa, Kyoko Hamada, Sarah Wilmer and Lu Zhang.
Posted by Tema Stauffer at Saturday, November 22, 2008 No comments: 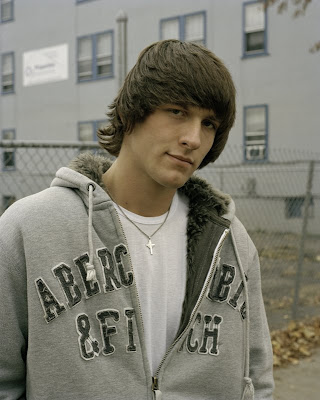 Binghamton High School is an old red-brick building on the corner of Main Street and Oak Street. There are police men posted at this intersection at all times, and teenagers stand in clusters on both streets. Young men on bikes hang out near the corner throughout the day in small gangs and come and go suddenly and urgently.

Whenever I made the right turn off Main Street onto Oak Street and passed the side entrance of the high school, I felt some nervousness about looking for young men. I wondered if the police men noticed how many times my car passed the high school and what assumptions they might make. I figured at worst, they'd suspect that I was looking to buy or to sell drugs, and I prepared myself to explain my photo project were I questioned.

When I saw Paul walking alone half a block down from the high school, I was almost relieved, and even more relieved when he told me he was eighteen. Paul was extroverted, confident, friendly. He said he knew a lot about photography and video from classes he had taken.

I thought he looked like he just stepped off the set of That 70's Show, except for the Abercrombie sweatshirt. Paul told me he was trying to get work from the Abercrombie store in Binghamton, and I wasn't sure if he meant as a clerk or as a model. I said I'd send him a photo if one came out okay, and he gave me his email address, which begins, "labeledwithoutmeaning@" ...
Posted by Tema Stauffer at Friday, November 21, 2008 1 comment: 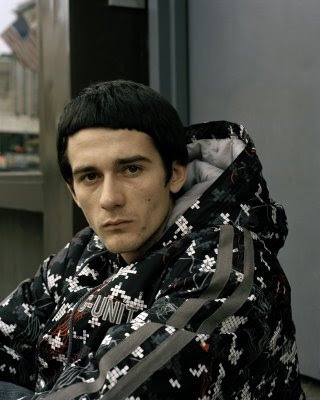 Ernest was sitting on a step outside a downtown storefront on Main Street, and the first thing he told me was that his girlfriend was having his baby on June 9th. I got the impression that he was sitting on Main Street waiting for June to arrive and for the most important thing in his life to take place. He said he wanted a girl - boys were too much trouble. If he had a boy, girls would be calling all of the time.

Ernest sat patiently through a roll of film and then he abruptly got up and said he had to leave. When I went back to the car and drove away, I noticed Ernest at the end of the same block on Main Street, waiting.
Posted by Tema Stauffer at Thursday, November 20, 2008 No comments: 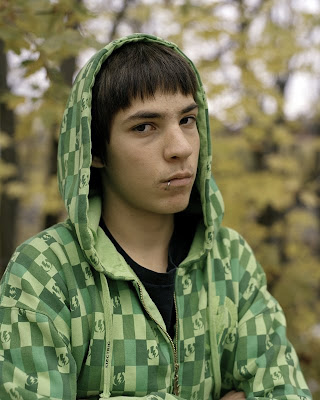 Michael struck me as so shy, I was surprised when he agreed to let me take pictures of him. He folded his arms across his chest and stared at me through an entire roll of film, and his expression never wavered from this slightly wounded half-scowl.

I didn't ask him many questions maybe because I was afraid to scare him away. He seemed like the kind of person who would take time to open up to someone else, and our time together was brief.

I wondered about his friends and his family, and what was behind that look on this face, but I didn't ask. I asked him how old he was, and he said fourteen.
Posted by Tema Stauffer at Tuesday, November 18, 2008 No comments: 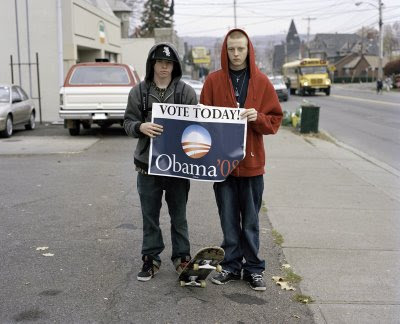 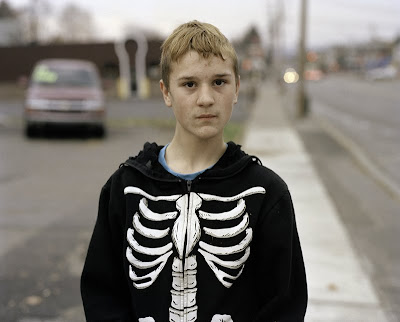 Many Americans will probably remember for the rest of their lives exactly where they were and what they were doing when the election results arrived on Tuesday November 4th confirming Barack Obama as our next president. One of my friends was celebrating the victory with her neighbors on the streets of Harlem and another friend, photographer Jason Lazarus, got to be in the heart of the action in Byrant Park documenting the beauty of that historical moment. I was sitting on my girlfriend's couch in her living room in Endwell, near Binghamton, sending and receiving text messages to and from friends around the country and wiping away some tears of happiness and relief.

I spent the afternoon of election day in Binghamton driving up and down Main Street, watching people too young to vote attempt to rally support for Obama. Teenagers were shouting at cars to VOTE OBAMA and even shouting the same message at me walking around with my camera. Kyle and Brad stood stoically with their Obama sign outside a gas station on their way home from school while I took pictures of them.

At the end of the afternoon, before dusk settled over Binghamton and I picked up my girlfriend from work so she and her mom could make it to the election site to cast their votes, I found Matthew bagging dried leaves on the sidewalk outside his father's auto body shop. I noticed him watching me in the car watching him, and when I stopped to ask if I could take a picture, I approached him gently since he struck me as so delicate. He didn't say much and was perhaps less preoccupied with the significance of the day, but he seemed to appreciate the unexpected experience of being photographed.

By now, we have seen all kinds of photographs taken on this incredible day, but I recently discovered some good documentary photography on a blog, We Can Shoot You, consisting of work by ICP photojournalists capturing these latest events. The blog also includes images of supporters of gay marriage outside The Church of the Latter Day Saints near the Lincoln Center protesting the passage of Proposition 8. For as much progress as was made on election night, Proposition 8, which reversed marriage equality for gay couples in California and wrote discrimination into the California Constitution, is a huge set back for the gay community, and fortunately, is inciting protests around the country.

While personally, I would drink battery acid before I'd dress up like a bride or a groom, and hope that gays couples ultimately continue to redefine their relationship to gender roles and the institution of marriage, I'd naturally like to see gays, including myself, achieve the same rights as everyone else, and find it incredibly sad and pathetic that it is still socially and politically acceptable and even advantageous to legally discriminate against gays in this country. We may be the next minority group most in need of a civil rights movement, and those wheels are already turning.
Posted by Tema Stauffer at Sunday, November 16, 2008 2 comments: 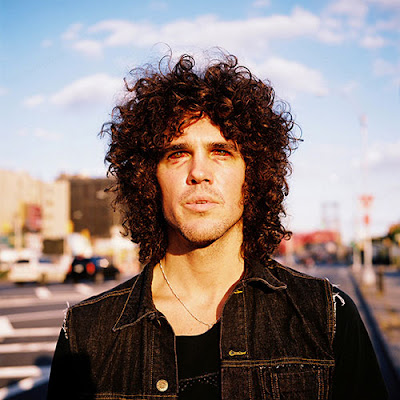 Francesca Romeo and I have recently been invited by Daniel Cooney Fine Art Gallery to participate in a two-person exhibition of our portraits scheduled to open on February 19th, 2009. Daniel Cooney, who belongs to the Camera Club's benefit committee, will also soon announce an on-line auction through his gallery of work by emerging artists, including some of the photographers above.

A preview of the work in the Camera Club Auction can be found here: CAMERA CLUB AUCTION 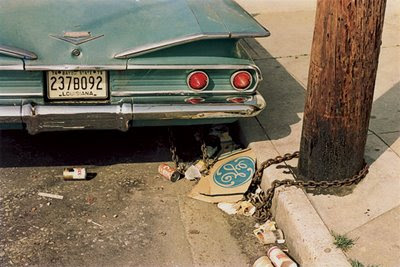 Next to Barack Obama getting elected to be our next president, the second most exciting and historical event this week, as far as I'm concerned, was the opening of William Eggleston's first retrospective at the Whitney Museum of American Art. I took my ICP class on a field trip to the museum, and we dissected some of the seminal works that shaped the evolution of color art photography and the attention to the everyday as subject matter. At an extraordinary moment in time where there is a sense of new hope for America, it was moving to see images shot during the last five decades by an artist who is deeply attune to the characters and places that make this country strange, complex and fascinating.