I am settled back into my Brooklyn apartment after the journey home with Paris. Thank you to everyone who sent messages, comments and even a postcard ... your compassionate words meant a great deal to me. I am happy to report that Paris adjusted incredibly well to my parents' house and seeing him come back to life in a kinder place after his struggles in New York brought an enormous sense of relief to me. Despite how much I will miss having him with me, I feel absolutely certain that it was the best decision for him and that he will live a longer and more peaceful life in Kalamazoo.

As for our road trip together, we made it to Niagra Falls and spent a night at The Sunrise Inn on Niagra Falls Boulevard. It wasn't quite the romantic experience I had hope for, as the driving and dislocation left Paris up all night crying and stumbling around the room in the dark, and me curled up on the bed, exhausted and heartbroken. But I am sure we weren't the first or last pair to spent a rough night together on the boulevard.

Now I am starting the next phase of my life, loving my dog from afar, getting ready for jury duty tomorrow, looking ahead at the rest of the summer and hoping I can finally take some photos again soon.
Posted by Tema Stauffer at Monday, July 28, 2008 2 comments: 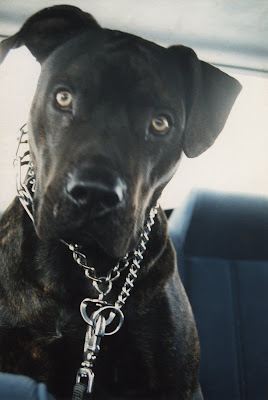 Tomorrow morning, I am leaving for Michigan with my dog, Paris. Paris is ten and a half years old, born on Christmas Eve in 1997, and I turn thirty-five on Sunday.

My ex-girlfriend and I got Paris in the winter of 1998. We had just returned to Chicago from a trip to Paris, the city, and seeing the dogs there was the last straw for me. There was nothing more important or urgent in my life than finding a dog for myself.

We found Paris in a family's home in the suburbs when he was two months old and so small we could fit him in a purse and take him out to eat with us at restaurants. He used to climb on my shoulders in the car and wrap himself around my neck like a scarf. He slept in the same spot in the crook of my neck and he chewed his way through most of my apartment - a mattress, pillows, shoes, a couple pairs of my glasses. We took him to puppy training school and he nearly flunked out, especially when it came to not eating the hot dogs in the obstacle course. But the teachers, like just about everyone else, were charmed by his irresistible sweetness and gentleness. We tried to crate train him for a while, but he protested by banging on the crate like someone in the kitchen throwing pots and pans. Whenever we took him to my parents' house in Michigan, he got especially wild and excited and raced in circles around their furniture.

When I was a kid, I told my mom when I grew up, I wanted to marry a dog. In many ways, I've felt like that is almost how things turned out for me. In the ten and a half years that I have spent with Paris, I've lived in three cities, nine apartments and have been in and out of a number of relationships. Paris has been the one constant presence - my rock, a child, a soulmate - whatever else it is that I can't put into words. Certainly, my most profound experience of unconditional love.

At night, we sleep wrapped around one another's warm bodies which fit together like they were made for each other. When I come home, giving Paris a hug and a kiss comes first, before past girlfriends and even the internet.

Our transition to New York in the summer of 2005 was hard on Paris. The concrete and stairs took a toll on his knees, and he eventually had an operation which helped a lot. His face grew more and more gray, but he continued to be the most handsome and beautiful thing in the world as far as I was concerned.

Living alone in this city, working long hours to support myself, making trips to develop my work ... all of that has lead to a great deal of guilt and stress surrounding my relationship with Paris. In recent months, as his health has rapidly declined, these feelings have consumed vast amounts of my emotional energy.

When I got back from my last trip out west in April, I discovered that Paris was losing his vision. I took him to the vet, but there wasn't much that could be done to improve his condition, and very soon thereafter, he became completely blind.

For the past couple of months, I have been trying to help him navigate the apartment and the streets and the stairs, which are the hardest obstacle for him. Recently, I have been carrying his eighty-five pound body down two flights of stairs twice a day because it is too painful and devastating to watch him struggle fearfully with the steps.

We have spent a great deal of the past couple of weeks holed up in my apartment - him crying and me crying. Sometimes he stands in the corners of the kitchen like he has no idea where he is, or suddenly falls off the bed, and is almost entirely losing his life-long enthusiasm for food. Whenever I move from room to room, he can't be too far away from me for any length of time without more crying.

After grappling with our situation and our future, I finally asked my parents if they would be willing to care for Paris in their home in Michigan and they generously agreed to help us. I simply could not wrap my head around the thought of him passing away in this city - taking him from one challenging environment, my building and the city streets, to a vet's office one day to be put to sleep.

My parents have a wonderful house with a grassy backyard and a lot less stairs. As much as this impending separation breaks my heart, I felt like it was the right thing to do for Paris to spend the conclusion of his life in a kinder place which has always been his second home.

We are planning to drive the northern route back to the Midwest, dropping down into Michigan through Canada. I hope we will spend Friday night in a motel in Niagra Falls, so Paris will have the opportunity to experience some fresh air and primal forces of nature that are hard to come by in Brooklyn.

It will be perhaps our last of many road trips together. For the rest of this month, I plan to tune off of the internet and work obligations as much as I can and give all of my love and attention to my dog.
Posted by Tema Stauffer at Thursday, July 17, 2008 5 comments:

Some shots of the installation of 8 photography on a hot and sultry night at Randall Scott Gallery following the opening reception ... 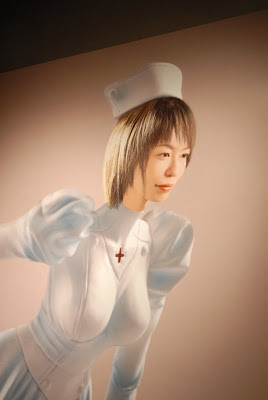 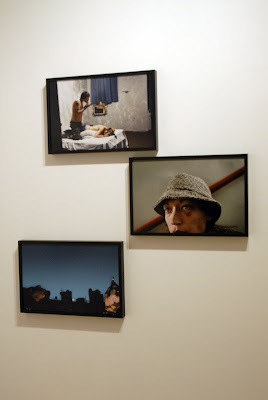 Jessica Dimmock (from The Ninth Floor) 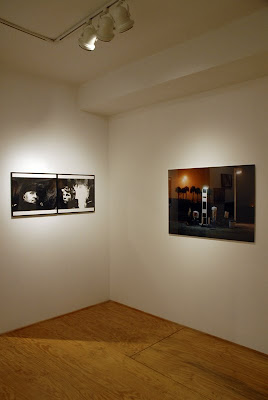 Alexandra Catiere (from Behind the Glass) and Tema Stauffer (Gas Station, Tampa, FL) 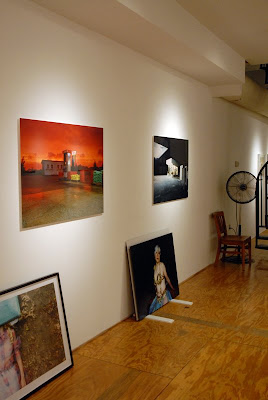 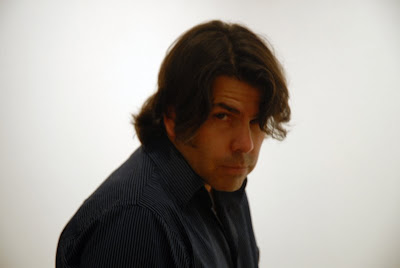 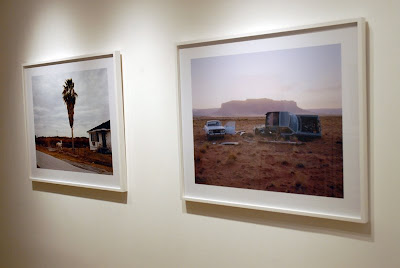 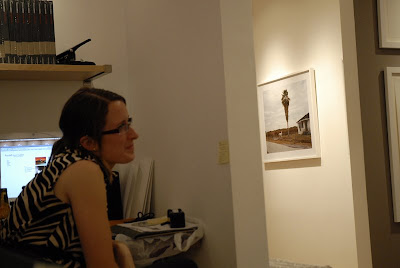 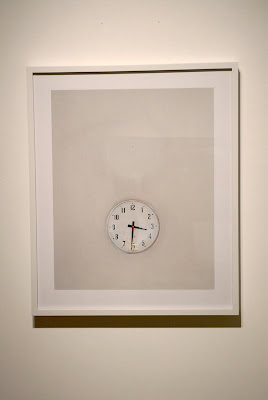 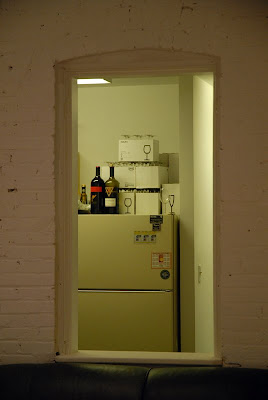 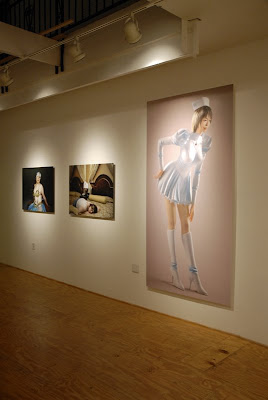 I've been knocked out for three long days with a summer cold, trying to pull it together to get on a bus tomorrow to DC for the opening of 8 photography at Randall Scott Gallery. Keep your fingers crossed or me that I make it on that 11:45 am bus at Penn Station.

I am very excited to be showing with seven other artists: Kyoko Hamada, Jessica Dimmock, Peter Van Agtmael, Alexandra Catiere, Shen Wei, Alison Brady and Ryoko Suzuki. The opening night will include work by all artists followed by four two-week two-person exhibitions throughout the rest of the summer.

Six of my prints, including both older and more recent images, will be shown along with Kyoko Hamada's portaits from July 12 - 26th.

Thank you to Randall Scott for noticing my work during his internet prowls and inviting me to participate in this exhibition.

Thank you also to a few people who have been especially supportive of my art endeavors in recent months: Bill Mondale, Charles Baxter, Mark Burnette, Matt Olson and Nina Corvallo. Your presence is felt in a major way. 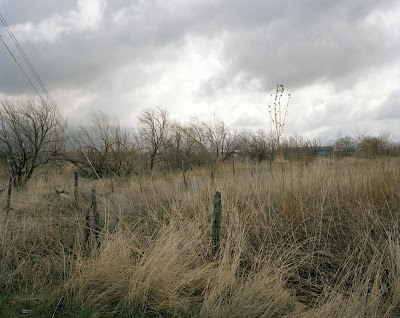 One Sunday while she was digging away in her garden, Gary carved their names on the apple tree. He did it with a pocket knife, real nice, real neat: GARY LOVES NICOLE. Nobody had ever done that before.

Next day she had a lot of things to do, and kept wanting to get back. When she finally reached home, she cleaned out his car first, then climbed up the tree to a place above where he had done it, and carved out: NICOLE LOVES GARY. Then she went into the house just in time to meet him.

He came out into the backyard with a beer and she told him to look at the apple tree. He didn't see anything and she finally had to point it out to him. Then he was happy as a kid, and said she had done hers better than his. Told her it was a beautiful heart she had carved around the names.

What were the odds of driving around Spanish Fork and finding the apple tree where Gary and Nicole had declared their love for one another thirty two years ago? Pretty slim, I thought. Like finding love itself. And making it work.

Spanish Fork, where Gary briefly stayed with Nicole, was drearier and poorer and tawdrier than Provo. Dark clouds hung over the town and seemed perfectly right for my impossible mission and my own disillusionment.

Does the fact that these dark clouds got me excited make me some kind of truly gloomy person or just practical-minded when it comes to telling a story?

I made a sincere effort to look for the most romantic and/or saddest tree I could find with no idea what it would look like when I found it. I found these trees in a field that separated the town from a National Guard unit on its outskirts, and they looked sad enough for me to stop the car and set up my camera.

I simply didn't have the patience to stay in Spanish Fork for ever and ever looking for a tree I'd never find. Some things are just made to stay in your mind like a fantasy or an ideal. I imagined Gary and Nicole walking through the field to carve their names on one of these trees instead. Maybe it was a sunnier day if it is ever sunny in Spanish Fork which was hard to picture at that moment, though I had often imagined the two of them under a hot sun, sweating.
Posted by Tema Stauffer at Sunday, July 06, 2008 2 comments: 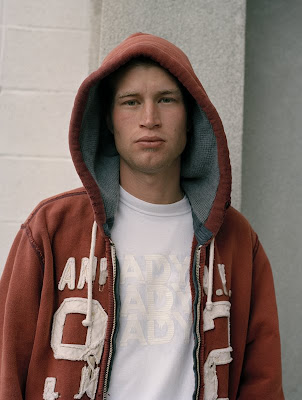 Before I left the City Center Motel in the morning, I had to take a picture of the clerk - if only for myself. The clerk, Sang, seemed peaceful and kind and tolerant, both towards me as a photographer and towards his long-term dwellers and their various dramas.

While I was waiting for Sang to return to the counter, I found Sean in the lobby of the City Center Motel reading The Book of Mormon Made Easier. I was immediately captivated by his strong and vulnerable face as well as his remoteness and his earnestness. I asked if I could photograph him outside the lobby in better light, and he was quietly compliant - no questions asked.

I photographed him with his book, but perhaps that one looked too contrived.
Posted by Tema Stauffer at Tuesday, July 01, 2008 3 comments: