I am very excited to announce that I have been awarded an AOL 25 for 25 Grant. AOL awarded 25 grants of $25,000 to "creative-thinkers" - artists, journalists and innovators. In their words, grants were given to "individuals with a spark to ignite – the next generation of culture shapers and influencers."

Please see a list of the 25 recipients: AOL Artists

Thank you, always, to my parents for their love and support and for their careful proofreading. Thank you to Jessica for bringing so much joy into my life and for inspiring me with her dedication to human rights advocacy for the international LGBT community and with her infectious optimism.
Posted by Tema Stauffer at Thursday, October 28, 2010 2 comments: 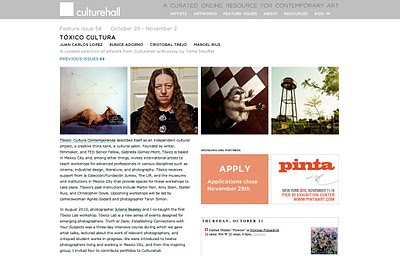 Tóxico: Cultura Contemporanea describes itself as an independent cultural project, a creative think-tank, a cultural salon. Founded by writer, filmmaker, and TED Senior Fellow, Gabriella Gomez-Mont, Tóxico is based in Mexico City and, among other things, invites international artists to teach workshops for advanced professionals in various disciplines such as cinema, industrial design, literature, and photography. Tóxico receives support from la Colección/Fundación Jumex, The Lift, and the museums and institutions in Mexico City that provide spaces for these workshops to take place. Tóxico’s past instructors include Martin Parr, Amy Stein, Stefan Ruiz, and Christopher Doyle. Upcoming workshops will be led by camerawoman Agnès Godard and photographer Taryn Simon.

In August 2010, photographer Juliana Beasley and I co-taught the first Tóxico Lab workshop. Tóxico Lab is a new series of events designed for emerging photographers. Truth or Dare: Establishing Connections with Your Subjects was a three-day intensive course during which we gave artist talks, lectured about the work of relevant photographers, and critiqued student works-in-progress. We were introduced to twelve photographers living and working in Mexico City, and from this inspiring group, I invited four to contribute portfolios to culturehall.

Juan Carlos Lopez’s photographic installation, Memento Mori, references a Latin phrase, “Remember you will die.” Lopez constructs images and sculptures that resemble a cabinet of curiosities composed of scientific specimens and mechanical objects. These elegant and meditative still lifes of animal cadavers, bones, decaying machines, and a camera preserved in a container of photographic fixer contemplate mortality and metaphysics. His arresting photograph of a bleeding goat carcass resting on a tablecloth, its head gracefully draped over a metal car cylinder, is reminiscent of the tradition of vanitas paintings which used symbolism to describe the impermanence of life and the certainty of death.

The Mennonite communities of Mexico have been portrayed in Carlos Reygadas’ 2007 film, Stellet Licht (Silent Light), as well Juliana Beasley’s photographic series, Eyes of Salamanca. Documentary photographer Eunice Adorno focuses specifically on Mennonite women and their relationships in communities in Durango and Zacatecas. Her body of work, Fraum Blaum (Flower Women), captures their quiet moments and their tender bonds. The subjects reveal to the young photographer personal experiences and domestic interiors with remarkable openness and candor. Adorno’s images appear to come from the view of an insider, as though they are no less intimate than snapshots from a family photo album. In fact, the photographer combines borrowed photographs taken by the Mennonites themselves with her own images to examine their homes, their rituals, and their daily lives.

The larger subject of Cristobal Trejo’s Calle Litost/Street Litost is the character of urban existence and its perpetual state of transience. His “city” is fragments of many cities, from Mexico City to Hanoi, New York City to Dhaka, Havana to Manila. Trejo wanders city streets in pursuit of the poetry found on sidewalks, in chaos, in the frenetic and the ephemeral. His use of saturated colors and atmospheric light gives his images an emotive charge and vibrant energy.

Marcel Rius, on the other hand, explores the flat, still, and barren terrain of northeastern Mexico. His Invaders series documents “alien” water towers erected in rural locales in the desert that supply water necessary to support life. The ghostly towns seem barely populated, except for a few figures in cars or on bikes in the dusty streets. Rius also photographs abandoned roadside diners in his related series, Cheap Meal. His images convey the stark beauty found in these desolate landscapes with wide blue skies – perfectly clear, or full of dramatic cloud formations. 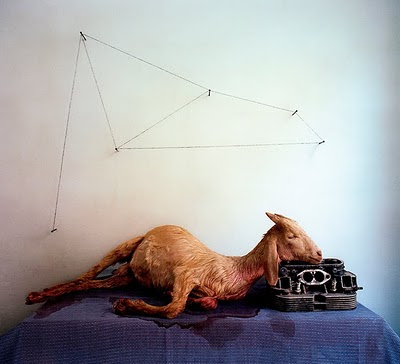 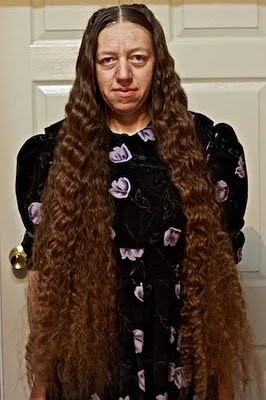 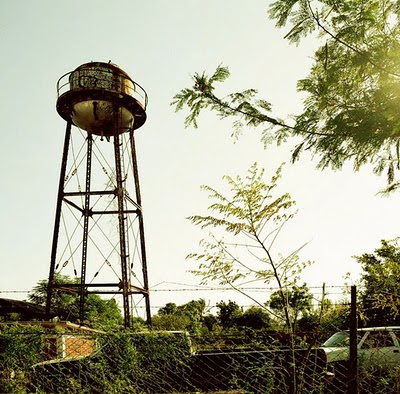 Invaders, by Marcel Rius
Posted by Tema Stauffer at Wednesday, October 20, 2010 No comments: 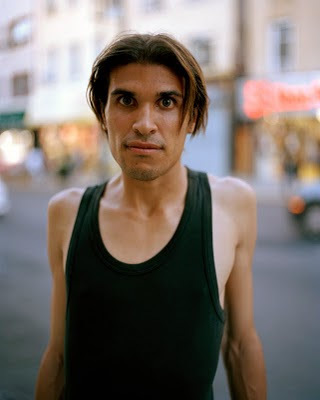 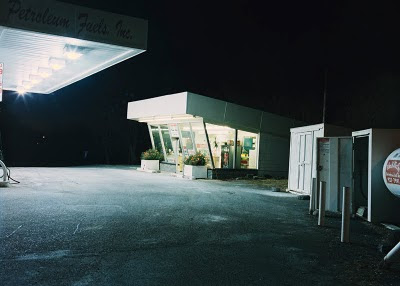 For an online preview of the auction: CCNY Auction 2010