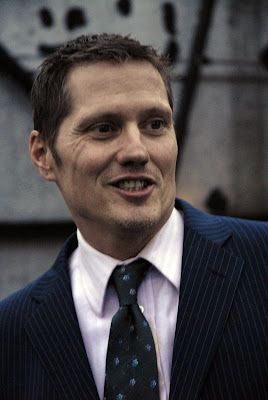 So, Jon Feinstein of Humble Art Foundation shed some light on the crazy starving dog story and sent me a link to an article which exposes the whole thing as a hoax - a stunt by the artist to cause a big stir, which it did. Over a million people signed this petition, which is at least a little heartwarming even if we are all annoyed for having been manipulated. It got me thinking about what we read on the internet, and how we might confuse truth and fiction, and how much weird stuff arrives in my inbox on a daily basis.

Besides the messages selling Viagra and other dubious drugs, I am regularly bombarded with messages revealing that I am the beneficiary of large sums of foreign currency once I have shared some details of my identity and contact information. But worse still are the inquiries from brides and grooms with sketchy yahoo accounts about the costs of my photography services for an upcoming wedding in NYC, usually opening with "Dear Sir or Madame..." and some words of flattery. Most of these messages are allegedly coming from foreign countries and the awkward use of the English language and the creepy tone sounds uncannily similar each time. Who writes these things, I wonder. Is there one evil mastermind with a million yahoo accounts or is there a sweatshop somewhere with laptops where workers are trained to perfect this particular style of bad English and ridiculously excessive formality?

Hmmm. Well, I just wanted to put something simple on the internet today - the face of someone I love and who I think is beautiful. My friend, Anthony, was in town for a long weekend for his cousin's wedding and spent his nights and mornings at my apartment in Brooklyn. While I have previously photographed Anthony on beaches in Minneapolis or making out with a cute guy on a couch in an apartment in the West Village, this time around, I got a shot of him on the rooftop of a building on 39th Street where the wedding reception was held. Too bad you can't see the awesome view of the city from this rooftop, but you might notice the slight coffee stain emerging from beneath his lovely tie which happened on our walk to the wedding in Central Park - the only blemish to his elegant beauty and sophistication as far as I can tell.

And one last thing ... thank you to Paddy Johnson for featuring my work this week in the masthead of her super smart and cool art blog, Art Fag City. You can find the post here: Tema Stauffer in Art Fag City
Posted by Tema Stauffer at Wednesday, April 30, 2008 1 comment: 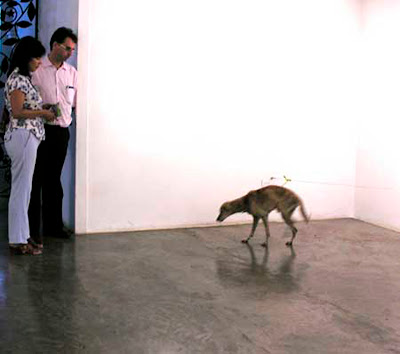 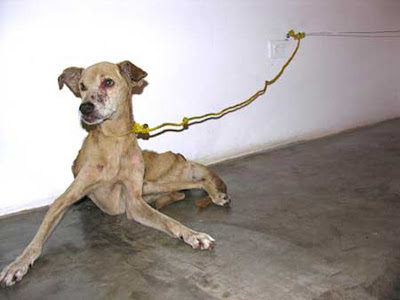 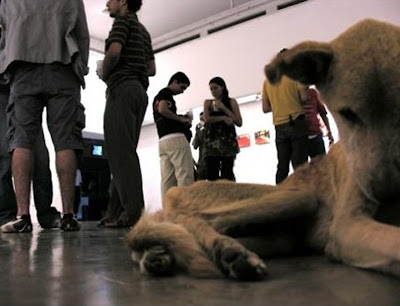 Some of you may have received some devastating photos and a link to sign a petition to save another dog's life from the art world which seems to be racing thru the internet like wildfire, thankfully.

But if you haven't, you might want to read the contents this petition and consider adding your name to the list:

From the limited information one can gather from this link, an artist named Guilliermo Vargas hired five children to capture a stray dog in Managua and then tied him to a rope in an art gallery. The artist and visitors of the exhibition watched while the dog starved to death in the gallery almost as though it were a performance piece. And the Visual Arts Biennial of the Central American has invited Vargas to recreate this "installation" in the biennial of 2008.

Does this sound like some totally bizarre parody of what the art world has come to? Am I missing something that would help to make this make more sense?

My friend speculated that this piece was intended to call attention to how we see animals starving on the streets all the time in real life and turn our backs to it, and by tying the animals to a rope in the gallery, the artist is calling attention to this kind of suffering. Except that if we tied a helpless person to a rope in gallery and watched the person starve to death, it doesn't quite add up to meaningful art that most of us could stomach.

I'm perplexed and disturbed, so if anyone has more insight on this story, please let me know. I first saw the photos of this dog and read the petition shortly after returning from my trip out west, where seeing stray dogs roaming in parking lots and streets in Arizona was already heartbreaking enough. And having photographed some dead animals and a dog who was taking it's last breathes on a street in Ship Rock, NM, I hope there is a significant moral distinction between between the act of capturing suffering, violence and death and the act of causing suffering, violence and death in the process of making art.
Posted by Tema Stauffer at Friday, April 25, 2008 7 comments:

I got back last night from an eerie journey through the deserts of Arizona and Utah. I spent some nights at a friend's house on a Navajo reservation in Kayenta, Arizona near Monument Valley, those ancient and spooky red rocks, and made drives through Colorado City, Hildale, St. George, Provo, Orem and Spanish Fork in Utah and across the eastern border to Ship Rock, New Mexico.

My rolls of film are processed already, and I can see reversed fragments of broken cars, motels, gas stations, churches, houses, dead animals, dead trees, streets, skies and a few faces from this strange part of the country with a dark history of violence and religious fervor.

More on that in a few weeks when some of this film is scanned ...
Posted by Tema Stauffer at Wednesday, April 16, 2008 2 comments: 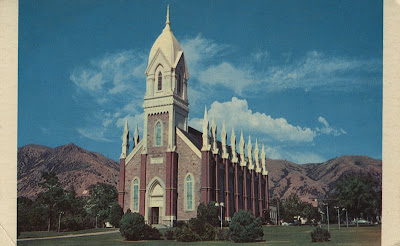 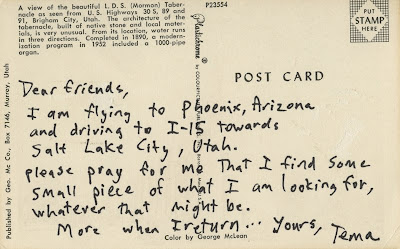 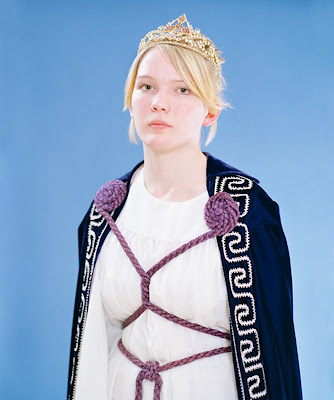 I'm not really a photographer from Minnesota, as much as I'd like to pretend sometimes because it does sound romantic and man, are some of them successful. I just lived there for four and a half years and was lucky to meet some great photographers who were actually born and bred in those parts. My friend, Ali Malone, is the real deal. Ali moved out to New York a year after I did for the graduate photo program at SVA. I took my first of many Photoshop classes with Ali at MCAD, and she taught me what an adjustment layer is and how to composite images. I am extremely slow and dumb and forgetful, but Ali is a techi whiz kid if I've ever met one.

Ali has work in a group show called Dream-Self opening tomorrow at Broadway Gallery in SoHo. The photographs in this series, "Daughters of Job," portray a secret society of girls ranging in ages from 10 to 20 years old who are the daughters and granddaughters of Freemasons. According to Ali, "These images are concerned with the psychology of identity formation through traditional ritual and role-playing within a patriarchal organization."

To read more about the exhibition, check out the press release.