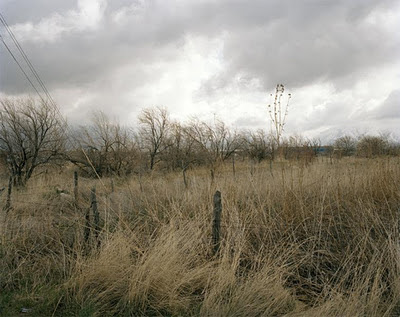 One of my photographs, Field of Sad Trees, was published in the Design Observer/Places accompanying a poem by Amy Beeder, author of Burn the Field and Now Make the Altar and professor of poetry at the University of New Mexico. Country Life is poem about Eastern European immigrants in the American Midwest.

Thank you to Places editor and friend Josh Wallaert for making the connection between my image and her words.

They came for land. For hog-high wheat to Dixon, Weeping Water, Garland Falls;
came to Midland hamlets, made their farms from bogs & marshes,
fens & bottomland: immigrants from Kraków, Darkov, Lasko

left forever what Riis called the strip of smoke-colored sky so that
their children’s children might grow up corn-fed, reverent,
thrifty; that they might join 4-H & raise lambs, might

crochet & macramé; might play the clarinet or their fathers’ accordions, always
optimistic despite the blizzards & drought, locust & blight.
Where there’s space to push the earth aside: that’s the place

to raise a child — here amid arrival’s plenty: starch & punch in a church basement; even so, a century later their descendants hear another music
over the television, the civics lesson, over the highway’s drone:

a white noise off the flat plain, an echo of the empty well’s temptation,
as if something in them yearns after all for chimney spill, the gritty stink of war,
how else to explain how some came to worship this caustic god,

to be nightwind, milkweed, goldenrod, chaos & immersion: to be the intolerable wild unplowed field, to be the one elm black with starlings?
Those whose parents thought they’d never be suppliants, never

wilt or starve — but we’ve seen them in mug shots, baffled
& sallow, broken as those girls in sweatshops going blind,
or the rawboned young Spinner in a Carolina Mill 1901

or the miners’ families evicted, or the garment workers corralled:
faces smeared & scattered as blossoms before the plow; all
catastrophically struck in the light of their own interminable

now, weary, girding themselves, helpless before the lens.
Posted by Tema Stauffer at Saturday, December 17, 2011 2 comments: 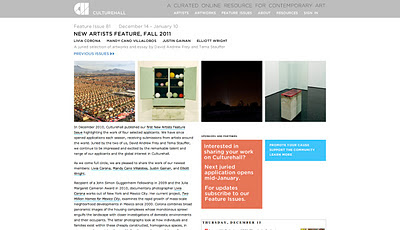 Applications for our Winter 2012 New Artists Feature open in mid-January.
Posted by Tema Stauffer at Thursday, December 15, 2011 No comments: