Down in the Basement 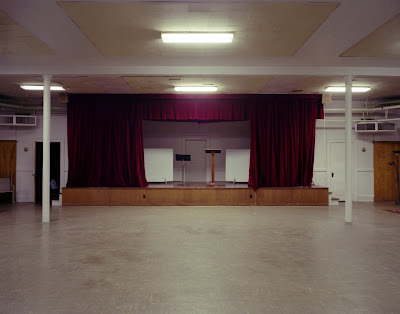 Fellowship Hall Stage, 2007
from Down in the Basement
copyright Sarah Madsen

I have an ongoing debate with one of my closest friends from Minnesota, Peter Haakon Thompson - who happens to be headed to the big city in a few weeks - about what epitomizes "The Real Midwest." Peter, who grew up in Minneapolis, claims that Minnesota is the real deal, and as far as I recall, the main and only point of his argument is that from a geographic perspective, Minnesota is centrally located between the East and the West.

While I, who grew up in Michigan in a town off Interstate-94 smack in between Chicago and Detroit, and then went to college in Ohio and graduate school in Chicago, claim roots in "The Real Midwest" for reasons that have more of a basis in cultural character. I'm from the Rust Belt - where the auto and steel industries collapsed and left cities full of holes, abandoned storefronts, crack houses, ever-rising unemployment rates - not to mention, the churches, thrift stores, sports teams, gray skies, dead malls, poor driving conditions due to rain from the Great Lakes, discount cigarette shops with names like The Butt Hutt, and some elite liberal arts colleges scattered throughout.

Most people out here in NYC probably don't really care and think it is all the same anyways - somewhere that exists between New York and Los Angeles, but I promise you, there are nuances. When I moved to Minnesota, I felt like I went on a long retreat in a Scandinavian enclave in what, to me, is a distinctly northern part of this country. It is bright and sunny up there. It's so clean, it is almost surreal. There are undoubtedly more blondes with cute, funny accents. And there is actually some money for the arts, even if it never came my way.

I didn't fully understand my own "Midwestern-ness" until I moved to New York City. Here, people frequently tell me that I seem very Midwestern. On one hand, I warily take that as a compliment to suggest that I might be nice, friendly, sincere, straight-forward, down-to-earth ... maybe even honest and reliable ... but invariably, it also means that I am not glamorous, savvy, sophisticated (damn). While in Midwest, I saw myself as a little edgier than the average Midwesterner, in New York, I feel almost folky.

One thing for sure is that Midwesterners have a keen sense of each other in New York City. We pick up on each others' biorhythms immediately and know that we will never fully be New Yorkers. It goes against the grain of our own sense of integrity, even if none of us actually want to live in Midwest. And Midwestern photographers in particular - can any of us shoot here? Is there ever enough space and time for the way we think and feel? Most of the Midwestern photographers I know return to places more akin to what we love and hate about where we are from.

When I met Sarah Madsen at Laumont, I knew she wasn't from these parts. She was way too sweet to be a real New Yorker. It made perfect sense that she is from Iowa - and even Iowa is more Midwestern in my book than Minnesota.

I asked Sarah and her friend and former co-worker, another midwestern photographer named Sara Code-Kroll, to give a talk about their work to a class I was teaching at the ICP in the fall of 2007 called Photographing the Everyday. Sarah showed images from her series, Down in the Basement, shot in the basement of a Presbyterian church in Iowa where her father was a minister. I know that the Midwest is not the only home to churches, and while perhaps the subject matter itself reaches beyond the Midwest, I still perceive a Midwestern sensibility in the way that Sarah makes photographs.

I don't know how anyone who has ever been to an AA, NA, SA, DA (etc.) meeting could not find something poignant about these humble rooms that Sarah has depicted so beautifully. And even for those who went to church upstairs, they must have gone down at some point for coffee and donuts, or to change into a choir robe, or just to use the bathroom.

Admittedly, I was never really a fan of church. My grandfather was a Methodist minister, and I was baptized in an Episcopalian church, belonged to a Presbyterian youth group that went on cool trips, and even went for a while to a futuristic Unitarian church with spectacularly cheesy light shows. There wasn't much about church services that kept me coming back. Sermons were inevitably boring, and the Bible had way too many characters and too thick of a plot. I have always preferred modernism and what followed in my reading material, and I've never had a taste for anything epic, except maybe One Hundred Years of Solitude and The Executioner's Song. Besides that, church was overwhelmingly heterocentric, like school dances and high school parties, and I hated to dress up.

Enough about me! Sarah Madsen's first solo show in New York City is opening tonight at Galeria Ramis Barquet. Whatever you might feel about church basements or Midwesterners, you might just appreciate Sarah's work as great photography that transforms something simple into something remarkable and full of emotional resonance. You might appreciate the subtle and well-rendered details of spaces worn by time and use. If I don't sublet my apartment soon, I might just ask Sarah to come over and photograph it for me - to show you all how lovable it really is - perhaps even, Midwestern.

Sarah Madsen
Down in the Basement

Labels: Down in the Basement, Ramis Barquet, Sarah Madsen, The Midwest 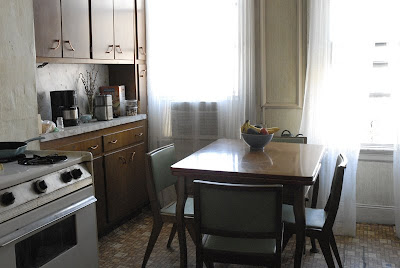 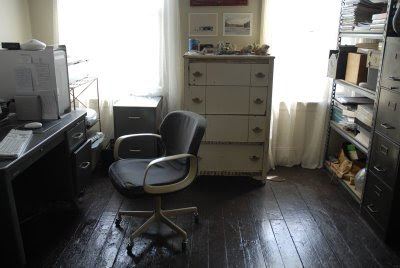 I am leaving on June 11th to spend part of the summer in Austin and I'm looking for a good person or couple to sublet my apartment. I will return to New York on July 15th and I also have a place to stay in Brooklyn during the last week of July, so there are several possible scenarios.

My apartment could be available for one month from mid-June to mid-July, or available for both June and July. In the latter scenario, I could either share the space with the subletter for the beginning of June and one week in July, or I could potentially stay with friends if someone wants the space to themselves for both months.

About the apartment: It is located on Graham Avenue about five blocks from the Graham L-train (near Williamsburg/Greenpoint). It takes less than fifteen minutes to get to Union Square in Manhattan. It is a charming block with a laundromat, a bakery, a cafe, a nail salon, a hair salon, two delis, two vintage stores, a French restaurant, an Italian restaurant - everything you could possibly need.

The apartment is an older railroad on the third floor of a small building. There are three rooms - a kitchen, a living room, and a bedroom/office. Plus a little bathroom with a shower and a tub. The apartment gets sunlight on both ends as you can see from the photos above, and the general aesthetic is very retro.

I would love to find a friend of a friend to stay here, or someone who can assure me they are entirely trustworthy and responsible. Artists, students, international visitors are all great.

Please pass this information along to someone who might be looking to spend part of the summer in New York.

Please contact me at my email address to discuss the dates and the cost of the sublet.
Posted by Tema Stauffer at Friday, April 24, 2009 No comments: 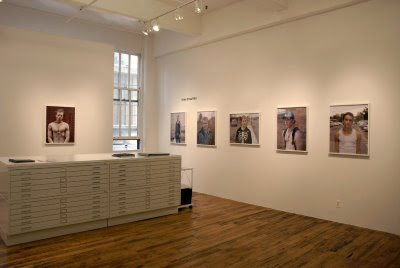 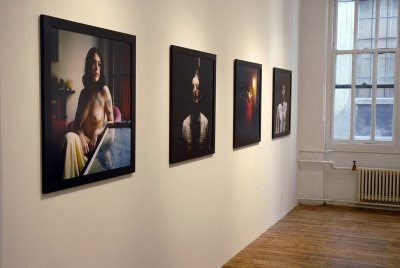 Our show at Daniel Cooney has been extended one more week and now closes on Saturday April 25th. Showing next at the gallery is an exhibition of drawings by Jason Francavilla, Rubens Ghenov and Michael Whittle from April 30th and May 30th, followed by an exciting summer salon of work by photographers Juliana Beasley, Felix Cid, Bradley Peters and Rebecca Sittler Schrock, opening June 25th.
Posted by Tema Stauffer at Friday, April 17, 2009 3 comments: 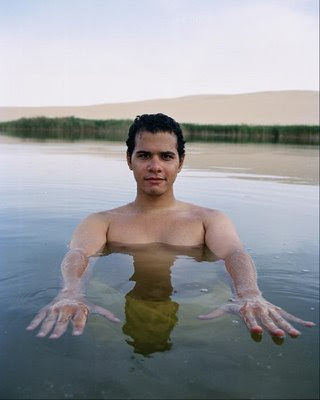 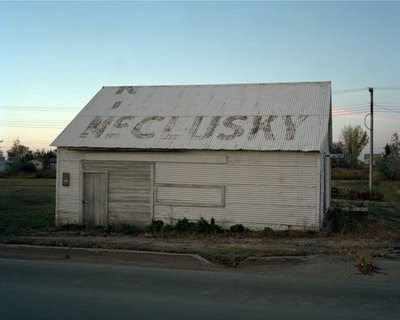 Founder, David Andrew Frey, and I have been busy making new developments to culturehall, an online curated space for contemporary art. We have recently added new artists and established an ARTIST RESOURCES section to culturehall's homepage listing some of the international blogs and websites with whom we have established relationships. We are currently featuring ArtWranglers and TransitLane from Australia, Brask Art Blog and Erik Sjodin from Sweden, Lalande Digital Art Press and Store Front Windows from France, Phillineum from Norway, Little Paper Planes from San Francisco, and one of my personal favorites, We Can't Paint, an excellent blog about photography written by Noel Rodo-Vankeulen from Canada.

Some of the artists who have contributed portfolios to culturehall are David Smith, Brian Lesteberg and Brandon Hale Holmes. David Smith's current exhibition, Before and After at HQ Gallery in Brooklyn, is featured on culturehall's FROM THE COMMUNITY SECTION of our homepage.

Brian Lesteberg is a young and talented photographer based in Minneapolis. His work was published in 25 Under 25: Up-and-Coming American Photographers, Volume 2 released this spring by powerHouse and CDS Books at the Center for Documentary Studies. While I was still living in Minneapolis, Brian shot an unforgettable series, Raised to Hunt, about his experiences growing up in a culture of hunting in North Dakota. He has since further explored northern environments in his more recent projects: Places of Worship, Portraits of Home, and The Broncos of Miles City.

Brandon Hales Holmes was formerly a student of mine in a class I teach at the ICP, Photographing the Everyday. He was recently accepted to SVA's MFA photo program for the fall of 2009. Among his various projects are 97 Days in Egypt, shot on a journey last summer, and Junction, shot in his home state of Texas. Brandon, who is also an exceptional writer, maintains a blog about photography, in motion.

David and I are excited to have these three artists involved in culturehall's community and we look forward to adding more new artists in the upcoming weeks.
Posted by Tema Stauffer at Tuesday, April 07, 2009 3 comments:

Women in Photography is providing a $3,000 grant award to support the costs of a project by a woman working in photography. WIP's curatorial staff, Cara Phillips and Amy Elkins, will review applications from April 1rst thru May 1rst, and the winner will be announced on June 10th at the National Art Club, Grand Gallery.

More information about eligibility and submission guidelines can be found at: WIP-Lightside Individual Project Grant
Posted by Tema Stauffer at Wednesday, April 01, 2009 1 comment: