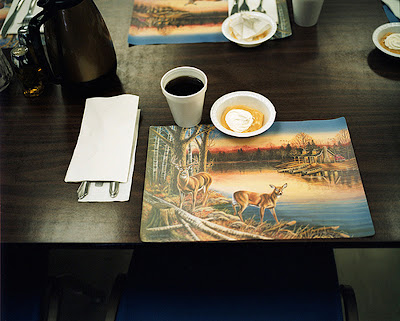 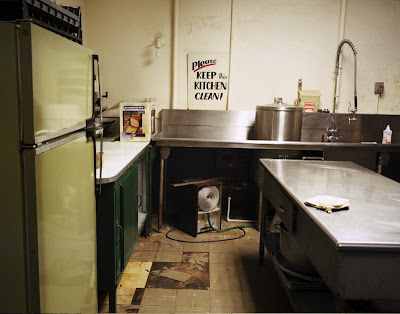 Last night, two guest photographers, Sara Code-Kroll and Sarah Madsen, presented their work to my class, "Photographing the Everyday", at the ICP. I met Sara and Sarah last spring when they were both working for Laumont, a photo lab where I had some prints made. I discovered that they were both photographers from the Midwest and later had the opportunity to see some of their work in an exhibition at Phoenix Gallery.

As a Midwesterner, I inevitably feel an affinity towards photographers from the Midwest making work about the Midwest. I immediately responded to the qualities of stillness, spaciousness, straightforwardness and subtle strangeness in both Sara and Sarah's images.

Sara's current project consists of images of her home state, North Dakota. She has photographed vast open landscapes, houses and churches, a senior center, interiors of stores and the abundant taxidermy found in this region. Her landscape images capture the tranquility and otherworldliness of the far north known for hunting and corn fields and harsh winters and the Coen Brother's Fargo.

I was reminded of the work of another photographer from North Dakota, Brian Lesteberg, who now lives and works in Minneapolis. While he was a student at the Minneapolis College of Art and Design, Brian began a stunning series of photographs called Raised to Hunt based on his experiences growing up in a culture of hunting. His images of the North Dakota landscape are stark and dramatic and infused with the intensity and beauty of cold air, darkening skies and traces of animal blood.

Sarah Madsen grew up in another state with no shortage of cornfields. She has recently returned to her hometown in Iowa to photograph the basement of the Presbyterian Church where her father led a parish. Given a lack of funds for upkeep, the church basement, like so many church basements all over this country, has retained it's fading decor from previous decades. These rooms she has portrayed are quiet, humble, full of pathos and integrity and good intention.

My father's father was a Methodist minister whose vocation brought his family to churches throughout small towns in Illinois, and my own memories of childhood lead me back to these Midwestern interiors. And in later years, I spent countless hours in church basements in Minnesota in a process of recovery, and so these kinds of rooms have a personal resonance and poignancy.

Sara and Sarah's journeys to make pictures suggest the different ways photographers discover what to photograph. While Bill Sullivan, our previous guest photographer, finds his inspiration in the city, these two expressed their need to leave the chaos and over-stimulation of the urban environment and return to quieter places where they can see more clearly and find meaning in the everyday that is relevant and important to their own histories.
Posted by Tema Stauffer at Saturday, November 17, 2007

Tema i look at your links and thank for the opportunity to do so.
Your taste is supberb.

you're so dead on about the church spaces. a couple of days before our wedding in jersey, i went to a baptist church to pick up a commercial refrigerator that we were borrowing from a friend. it kind of freaked me out how familiar yet foreign the space seemed. i never put two and two together. i too spent months going to different churches in jersey to meetings about 5 years ago.