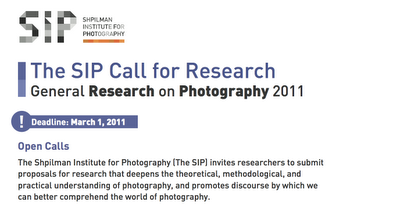 The SIP invites scholars and independent researchers from all over the world to submit their applications through its website, where guidelines, themes, the application process, and submissions can be found.

Grants are based on proposals for research leading to the completion within the grant period of a written document, whether an essay or extended research paper. All submissions and papers for both the calls must be in English. Grants for individuals and group research will range from US $5,000 up to $15,000. Deadline for submissions is March 1, 2011.
Posted by Tema Stauffer at Monday, January 24, 2011 No comments: 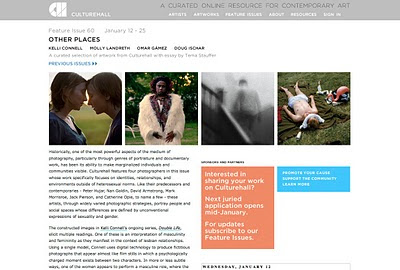 Historically, one of the most powerful aspects of the medium of photography, particularly through genres of portraiture and documentary work, has been its ability to make marginalized individuals and communities visible. Culturehall features four photographers in this issue whose work specifically focuses on identities, relationships, and environments outside of heterosexual norms. Like their predecessors and contemporaries – Peter Hujar, Nan Goldin, David Armstrong, Mark Morrisroe, Jack Pierson, and Catherine Opie, to name a few – these artists, through widely varied photographic strategies, portray people and social spaces whose differences are defined by unconventional expressions of sexuality and gender.

The constructed images in Kelli Connell’s ongoing series, Double Life, elicit multiple readings. One of these is an interpretation of masculinity and femininity as they manifest in the context of lesbian relationships. Using a single model, Connell uses digital technology to produce fictitious photographs that appear almost like film stills in which a psychologically charged moment exists between two characters. In more or less subtle ways, one of the women appears to perform a masculine role, where the other performs a feminine role. Her photographs raise questions about how gender dynamics are expressed in lesbian relationships and the nature of gender itself as a social construct. What makes the identity of this single subject different from that of her “other self” in each image are cultural cues like hairstyle, make-up, clothing, and body language. Reminiscent of scenes between Alma and Elisabet from Ingmar Bergman’s Persona, Connell creates spaces fraught with tension and ambiguity.

Molly Landreth’s series of large-format photographs, Queer America, celebrates a broad notion of queer identity. Among her subjects are gays, lesbians, bisexuals, and transgender people – individuals, couples, groups, and families existing outside mainstream conventions of sexuality and gender. Landreth asks her subjects, some of whom she meets through Facebook or Myspace, to suggest meaningful places in their own homes and neighborhoods where she can make portraits of them wearing clothing of their choice. These frank portraits made in states across the country document GLBT subjects of various ages, races, and economic backgrounds. In one image, Landreth photographed Cruz, aka Jalesa, in a backyard in Columbus, Ohio. At 17, Jalesa had just performed drag for the first time at Baptist church camp and struck poses learned from watching America’s Next Top Model. Landreth’s method of creating these photographs enables her subjects to present themselves as they wish to be seen; however, an inescapable truth is that how they are perceived entirely depends on who is looking.

Using a hidden camera, Omar Gamez spies on furtive sexual encounters between men in cuartos oscuros, or darkrooms, in Mexico City. Like Tennessee William’s Joy Rio – a formerly opulent opera house converted into a third-rate cinema where sexual dramas transpire in the roped-off regions – the darkrooms in Gamez’s photographs exist in old houses with tall ceilings, candelabras, and fading gilt. Legally, the spaces pass as gyms, and songs from radio stations fill the large hallways and decaying rooms with rhythmic sounds. Gamez occupies these spaces both as an artist and as a participant. In his images, the faces and identities of men are obscured beyond recognition by shadows, soft focus, and framing. What is visible are fragments of trysts between strangers where light leaks into darkness. The impressionistic stills and video of The Dark Book secretly capture anonymous men like ghosts in a ritual based in desire, mystery, and danger.

In contrast, Doug Ischar’s Marginal Waters series depicts gay men basking in sunlight on a Chicago beach. Ischar documented a community of men who congregated on the Belmont Rocks of Lake Michigan in the mid-eighties before the site was demolished in 2003. The images communicate a sense of warmth and relaxed intimacy - as well as freedom and openness in sexual expression – within a group of kindred spirits. In some cases, the men are coupled and shown in sensual embraces. Besides their historical significance as documentation of a specific cultural moment, what makes the images so engaging is the pure pleasure of looking at them. The saturated colors of the sky, water, and skin tones of seductive bodies accompanied by an assortment of quirky artifacts, like the biography of Diane Arbus and a pink flamingo or the eighties hairstyles and slinky shorts, result in irresistible pictures. 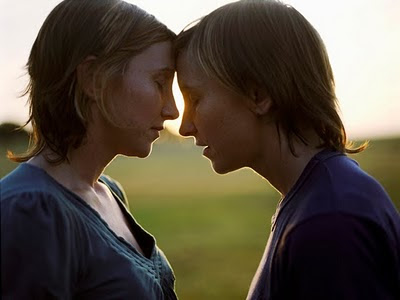 Head to Head, by Kelli Connell 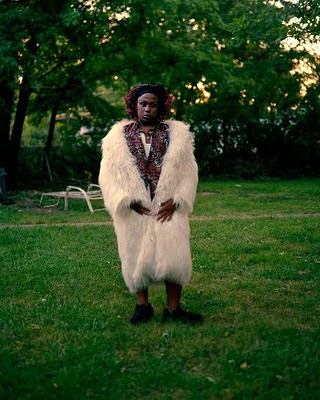 Cruz, aka Jalesa, by Molly Landreth

From The Dark Book, by Omar Gamez 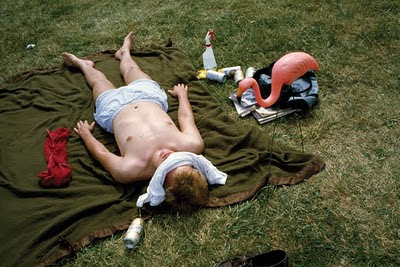