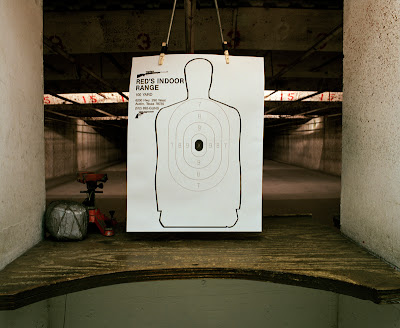 The first morning I woke up in Austin, I left my brother's house and drove straight to Twin Falls. I had my heart set on finding someone in the woods, someone beautiful and intense and sexy, or just simply interesting. It's December, and I was nervous that I'd find anyone at all. I walked a long trail through the woods to the falls, and the trees were exquisite in the morning light, but there was no one to be found. I tried to convince myself to appreciate this rare encounter with the forces of natural beauty and to accept an inevitable disappointment. How often will the real world meet up with one's hopes and fantasies, really, and isn't this the crux of what makes photography, not to mention love, so difficult?

I left the woods and drove aimlessly on Lamar in gloomier spirits and then pulled into the parking lot of McBride's Gun Shop. I toured the store, gazing at the guns and the taxidermy on the walls and the salesmen behind the counters. In a backroom, I found a bumper sticker that read I Heart Explosives next to an old t.v. set and some western memorabilia, and when I asked a clerk if I could take a picture, she directed me to speak to Mr. McBride himself.

Standing outside Mr. McBride's office, I felt like an overgrown tomboy whose awkwardness and discontent was all too visible on the surface, and considered how best to express this request to him. Mr. McBride was dressed in a pale suit and looked like a man's man who smokes cigars and hunts and knows how to manage money, and I told him I was interested in photographing some cowboy stuff in his backroom.

Mr. McBride sent an assistant to escort me to see precisely what it was that I wanted to photograph, and when I showed him, among other things, the bumper-sticker, he said, "Well, I can just give you one of these." I told him that wasn't quite what I had in mind, and I could hear myself faltering to explain what my intentions were. He said, "This doesn't make any sense ...," and I let it go, perhaps he's right, and left the shop in a deeper depression.

Frustration seething in my neck, I drove back down Lamar and got on Highway 290 towards Johnson City. I spotted Red's Indoor Range at the side of the road and figured I'd try my luck there. I was surprised when the clerk said it was no problem if I wanted to take a picture of a target.

The clerk trailed after me in the shooting range because I had wandered in without ear protection and might have staggered out deaf, which would have been a steep price to pay for a photograph, especially for one of which I was skeptical. While I shot the target, two large Texan men stood nearby firing guns, and their shots sounded like the underwater crunch of metal I recall from car accidents. I could feel the sound pass through my body, merging with my own dark energy, and wondered if this was satisfying somehow ... did I get this out of my system?
Posted by Tema Stauffer at Sunday, January 13, 2008

I'm glad they didn't, but even if things had gone terribly wrong at Red's, you could've moved back here to Mpls for sign language lessons from Amy.

One morning a sylph appeared to Mr. McBride. He wanted to give her something, but didn't quite know how to offer it. He stammered when she explained her mission. When she backed away, he wondered if he was going to turn into a stone, or a tree, if he missed one more chance to experience anything which he had not experienced before. "Better too few than too many" he consoled himself, thinking of words.