culturehall feature 38: INSIDE OUT 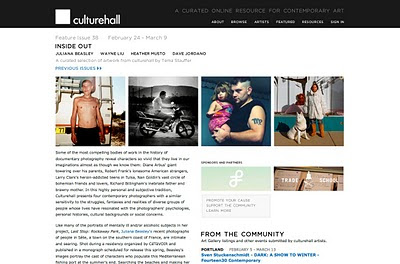 Some of the most compelling bodies of work in the history of documentary photography reveal characters so vivid that they live in our imaginations almost as though we know them: Diane Arbus’ giant towering over his parents, Robert Frank’s lonesome American strangers, Larry Clark’s heroin-addicted teens in Tulsa, Nan Goldin’s vast circle of bohemian friends and lovers, Richard Billingham’s inebriate father and brawny mother. In this highly personal and subjective tradition, culturehall presents four contemporary photographers with a similar sensitivity to the struggles, fantasies and realities of diverse groups of people whose lives have resonated with the photographers’ psychologies, personal histories, cultural backgrounds or social concerns.

Like many of the portraits of mentally ill and/or alcoholic subjects in her project, Last Stop: Rockaway Park, Juliana Beasley’s recent photographs of people in Sete, a town on the southern coast of France, are intimate and searing. Shot during a residency organized by CeTaVoir and published in a monograph scheduled for release this spring, Beasley’s images portray the cast of characters who populate this Mediterranean fishing port at the summer’s end. Searching the beaches and making her way into homes and social centers, the photographer gets close to her subjects to reveal their flesh, their wounds and their gazes in the stark light of her flash. Her teenagers are awkward or defiant, sunburnt and self-destructive. Beasley’s photographs remind us that, wherever we retreat or congregate, we are vulnerable and mortal.

Born in Taiwan, Wayne Liu divided his early years between his native country and the United States. He moved to New York City after his first year of college and shot his first photographs in the streets of Chinatown. Liu cites films at the Film Forum and Anthology Film Archives, street photography of American and European photographers, and books he discovered as an employee of the Strand Bookstore as influences on his artistic practice. In 2008, Liu travelled on buses through big cities and the countryside of China, parts of which were ravished by an earthquake. His series of black and white photographs, OK China, resemble stills from a grainy film noir. The drama of these dreamlike and melancholic images of anonymous strangers in motion or repose is further enhanced in the darkroom through a painterly process in which Liu burns in deep blacks and highlights specific areas of his prints.

Heather Musto began photographing Anna as a one-year-old in the year 2000. As her babysitter, Musto developed an intimate bond with the child and her extended family living in a blue-collar town in northern New Jersey. Over the course of seven years, she documented the domestic life and emotional bonds of her subject as her family members struggled with addiction and financial instability. While Anna’s parents and relatives appeared and disappeared in her life, her grandmother, a caretaker and licensed nurse, provided a home for the young girl. The photographer conveys an unsettling reality of a childhood through her honest and unflinching snapshots, but not without attention to Anna’s essential spiritedness and the efforts of adults to love and care for her. Musto’s own empathy underlies her commitment to connect with Anna both as a photographer and as a friend.

In his series, Prairieland, Chicago-based photographer Dave Jordano has explored the relationship between the land and the people of rural Illinois. His portraits describe people who exist on the fringes of mainstream culture as a result of their choices, isolation or economic hardship. Some of his inhabitants are dreamers, drifters or eccentrics, like Doris with her white dog and white fur coat. Some long to escape, to be picked up on the road and taken to a better place; others seem resigned, content or proud to be who and where they are. The accomplishment of Jordano’s best portraits lies in his gift for capturing subjects who are simultaneously individualistic and iconic of characters throughout Middle America. 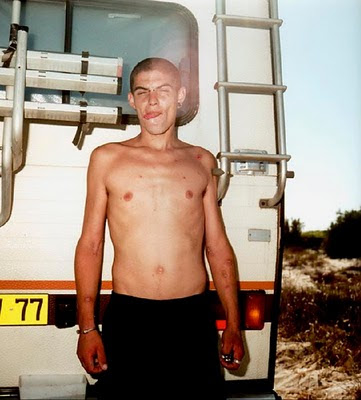 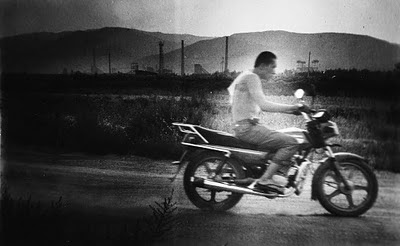 from OK China/the Past is a Foreign Country, by Wayne Liu 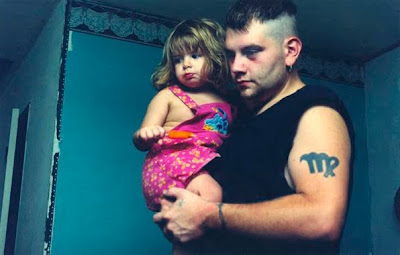 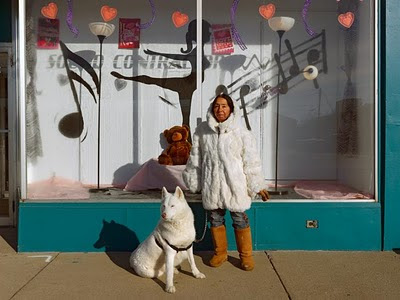